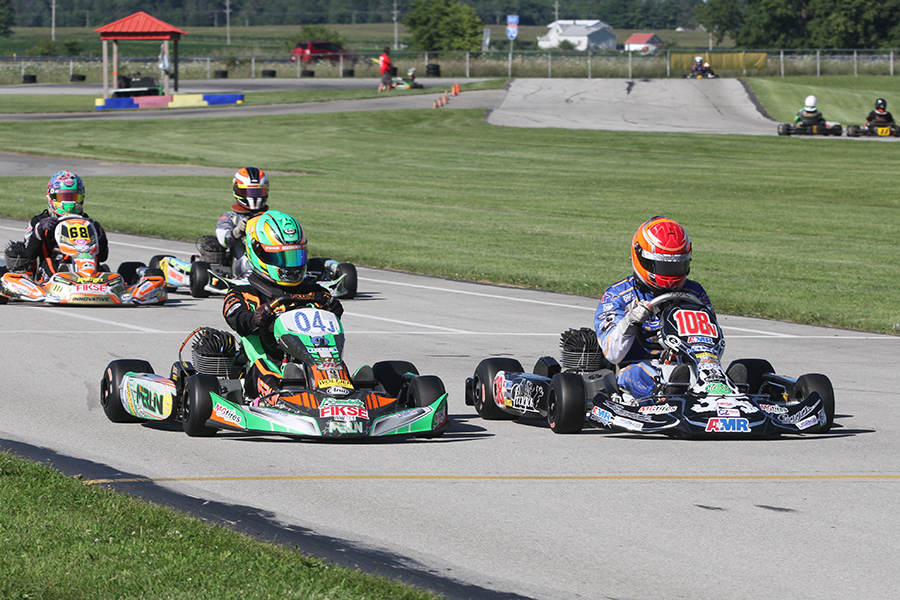 The United States Pro Kart Series – presented by Fikse Wheels and MG Tires – hosted the fifth round of the 2017 championship program Saturday at the New Castle Motorsports Park. The New Castle, Indiana facility welcomed just over 150 entries to the Hoosier Grand Prix with perfect racing weather throughout the day. Qualifying, two rounds of heat races and the main event decided the seven category winners, helping to further decide who will end the weekend at the top of the three IAME divisions for the IAME International Finals in LeMans, France. 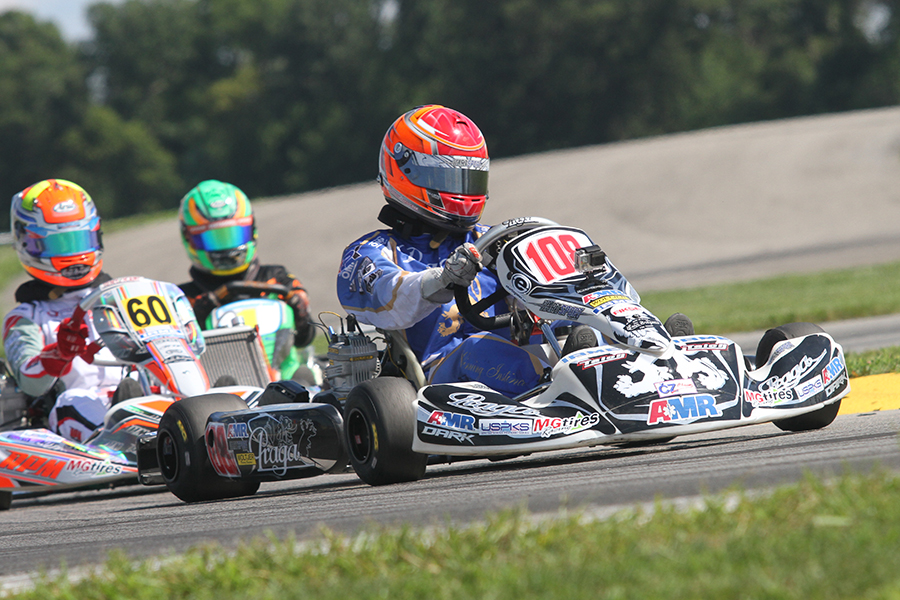 The Franklin Kart IAME Pro division welcomed its largest field of the year with 28 drivers taking to the track on the day. Leading the charge were the two top drivers in the championship chase – Brandon Jarsocrak and Alex Bertagnoli. The first to strike was Bertagnoli (Franklin / Merlin), earning the 10 bonus points for fast time in qualifying. Jarsocrak (KSNA / Praga) came back to win both heat races, landing the two on the front row for the main event. They were joined at the front by EKN TaG Driver Rankings #1 Jack Craig (RPM / Tony Kart). The scorecard showed Jarsocrak leading the entire 16 laps, but it was not without a fight. As they came to the white flag, the trio fought for the lead. Craig took over the lead coming out of the I-70 corner, with Jarsocrak striking back. With literally two wheels in the grass, he slipped past the 2016 SuperNationals winner. Bertagnoli tried to strike as well, and made contact with Craig going into turn one. That gave Jarsocrak with enough gap to get to the checkered flag first, scoring his third victory of the season at the series. Bertagnoli beat out Craig to the line for second. Stephen Dial (Franklin / Merlin) ran a solid fourth while Dario Cangialosi (Tony Kart)drove up from 10th to fifth. Sonny Cervelli (RPM / Tony Kart) was quickest Friday Happy Hour, driving from 23rd on the grid to sixth. In Heat #1, a wreck involving Clay Settles (Tony Kart) and Jake Venberg (Merlin) resulting in a red flag. Venberg was transported to the hospital, coming out with a broken elbow and a number of bruises. We wish him and Settles the best in their recoveries. 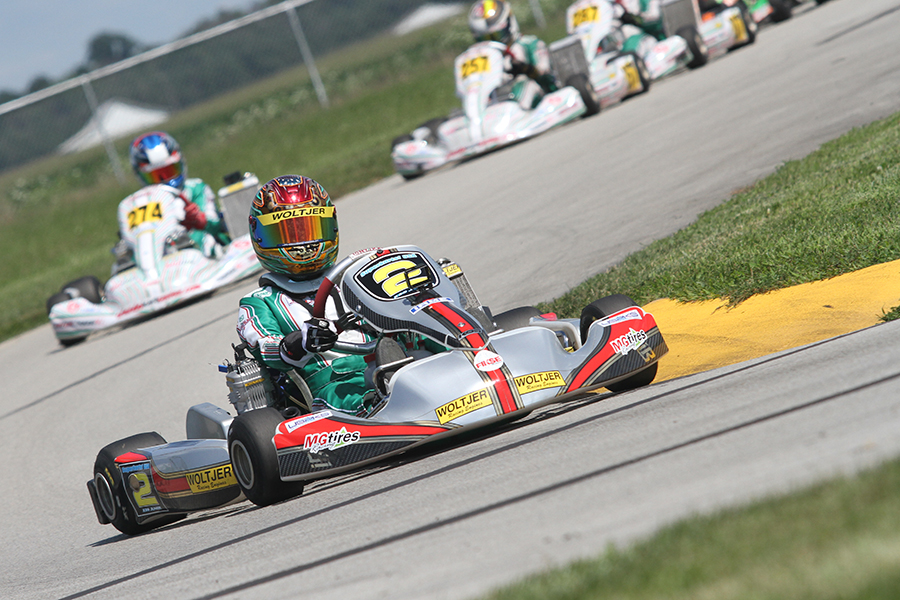 Switch Racing Engines KA100 closed out the day with another epic race. Alex Bertagnoli (Franklin / Merlin) led throughout the day, sweeping the action in the category. In the main, Bertagnoli trailed Jarsocrak (KSNA / Praga) until taking the lead on lap 11. The two pulled away from the rest of the top-five, keeping nose to tail. It came down to a run to the checkered flag, with the two drag racing to the line. By three thousandths of a second, Bertagnoli scored his second victory of the season, helping to close up the championship chase to just 17 points trailing Jarsocrak. TJ Koyen (Innovative / Exprit) led the opening laps, and won the battle for third over Michael McAndrews (Fullerton) and Colton Ramsey (Franklin / Merlin).

Dylan Tavella has been racing at New Castle for a number of years, and has always shown to be among the best drivers at the circuit. He proved that by sweeping the action in the Woltjer Racing Engines IAME Junior category. Tavella ran away with the pole position and two heat races. It looked to be a battle in the main event with SRC / Tony Kart drivers Tyler Gonzalez and Tyler Maxson, both winning in their last trips to New Castle, came up to challenge Tavella. Maxson led one lap before Tavella took back the position and was able to break free. From there, he drove to a one-second advantage for victory in his USPKS 2017 debut. Championship leader Maks Kowalski (Franklin / Merlin) was shuffled back at the start, but fought his way to the runner-up spot. Maxson crossed the line in third, removed from the results following tech inspection. That promoted his teammates Jeremy Fairbairn and Gonzalez to third and fourth with Caleb Bacon (Tony Kart) completing the top-five. 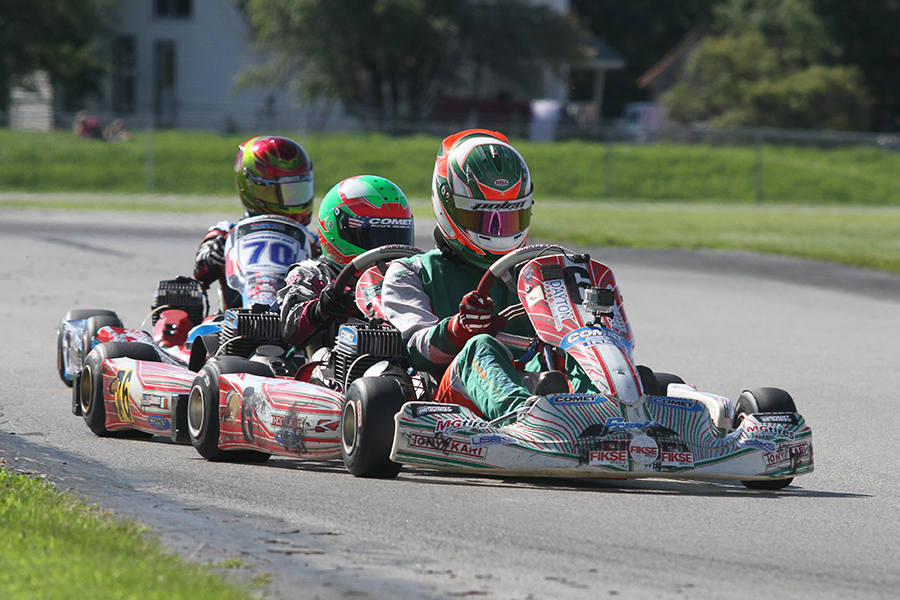 Four drivers made up the L&T Clutch Yamaha Junior field, however the top drivers made it a battle to the end in every session. James Lynch (Tony Kart) took the top honors in qualifying an won both heat races over Matthew Mockabee (Tony Kart). The two were joined at the front with Colin Neal (Tony Kart), until he lost the draft. The main event victory went down to the wire, with Mockabee edging out Lynch by 15 thousandths for his first major victory. Neal settled in third with Austin Morris (FA Kart) placing fourth.

The Allison Racing Engines Mini Swift class was a toss up with 27 drivers taking part on the day. Nicholas Terlecki (Merlin) took the fast time in qualifying while Santiago Trisini (Benik) and Alex Powell (Energy) splitting the heat races. Reece Gold (Benik) qualified 13th and worked his way forward in the heat races. He led the opening laps of the main event, along with Terlecki and Trisini each taking a turn at the point. Terlecki put himself into the lead on lap eight, and was able to remain there until the run to the checkered flag. Powell made his move coming to the checkered flag, coming up just seven thousandths short with Terlecki taking his first victory of the season. Gold ended up third with Kyffin Simpson (Energy) fourth and Trisini in fifth, moving up to the championship lead heading into the Sunday. 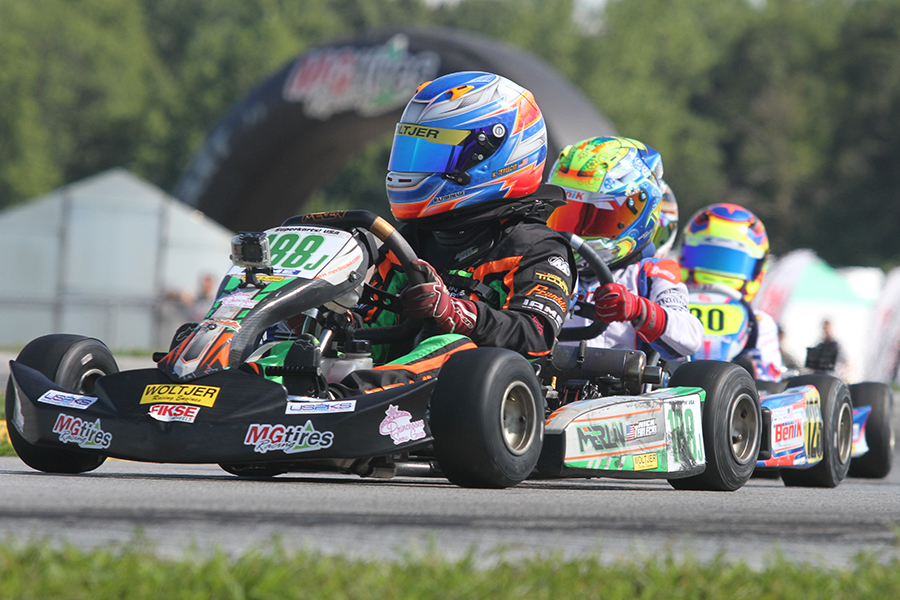 His second came in the Innovative Performance Micro Swift class. Mateo (Benik) earned the pole position for the main event, coming from sixth after qualifying. He was joined by Nitro Kart driver Ben Maier, Sebastian Ng and Frankie Iadevaia along with Elliot Cox (Energy). Contact on lap eight shuffled the lead group, putting Cox and Mateo out front. On the final circuit, Mateo took the lead and made it to the checkered flag for the victory. Maier ended up third ahead of Ng with Miguel Costa in fifth. 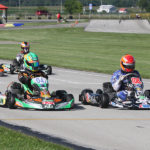