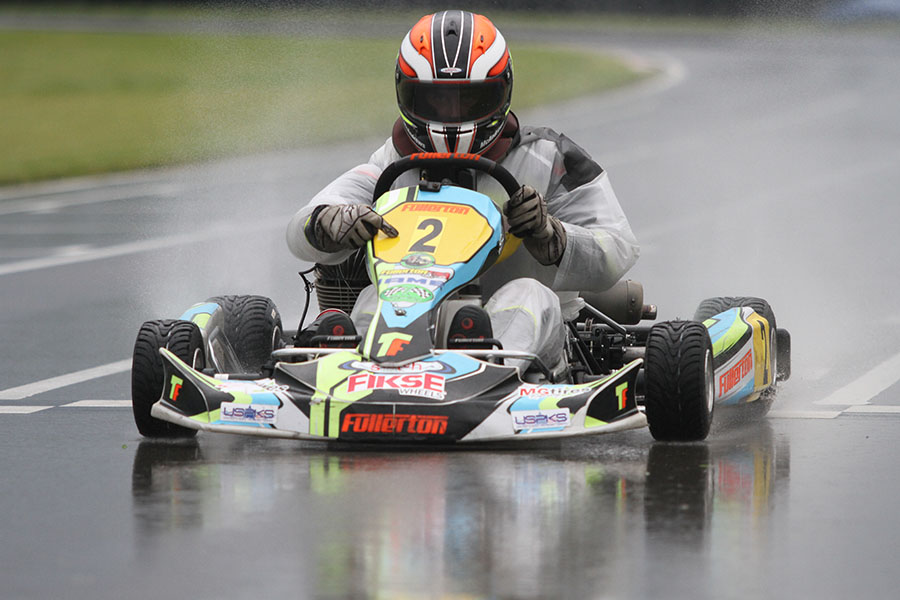 Each and every time we visit the Pittsburgh International Race Complex, rain is a factor. No matter the series, no matter the month, the clouds seem to find the Wampum, PA facility. The final day of the USPKS Liberty Grand Prix went into the books on Sunday with rain hitting the track just as the Prefinal round was completed. All seven of the main events were contested on a wet track with on/off rain showers. The change in weather brought with it some dramatic moments throughout the Finals, including a solid performance by Fullerton USA’s Mike McAndrews in the KA100 division along with KartSport North America’s Brandon Jarsocrak earning a second victory on the weekend.

McAndrews (Fullerton) set the fast time in qualifying for KA100, but shuffled back to fourth in the Prefinal after a great 12-lap race. When the rain fell, McAndrews took advantage. Nick Landi (FA Kart) jumped out to the lead on the slick track, the first class on the wet circuit. He led the first five laps until McAndrews assumed the lead. From there, consistent laps allowed the former series champion to pull away from the battle behind him. At the line, McAndrews took the first USPKS victory for Fullerton-USA, becoming the fourth different winner in four rounds of racing – dedicating the victory to the late Kyle Adkins. TJ Koyen (Innovative / Exprit) was determined to put in solid results all weekend. After posting fast laps in the Prefinal with a solid second place effort, Koyen held onto the lead pack before securing the second spot for good, earning his best result of the season. One driver who was extremely quick was Franklin Motorsports’ Josh Hotz. Starting sixth, Hotz spun on the opening lap but was quick to recover. He knifed his way up to fifth, primed to battle for the runner-up spot until spinning again. Losing only time and one position, Hotz jumped back on and posted fast laps of the race, working past Landi and Saturday winner Brandon Jarsocrak (Praga) to claim the third spot. ‘Money’ settled for fourth while Landi placed fifth. 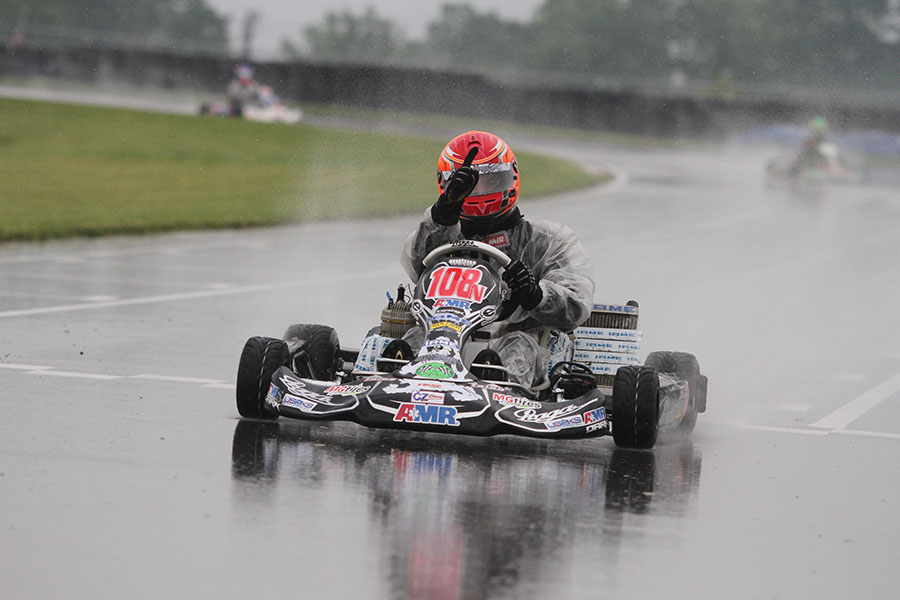 The IAME Pro Final was a wild one, going to the final corners. Prefinal winner Brandon Jarsocrak (KSNA / Praga) led the field to the green flag, but faltered for a moment coming out of the opening corner. He again seemed to lose power as they exited turn four, dropping to the tail of the field. Many thought it was a broken throttle or a carburetor issue, but in reality it was the rain suit getting sucked into the rain airbox, which has the opening facing the driver. Back by over five seconds to teammate and Saturday winner Jacob Donald (KSNA / FA Kart), Jarsocrak dug in and began his journey back to the front. Posting fast lap after fast lap, Jarsocrak put himself into the second position by the halfway point of the 20-lap event. He then made quick work of the advantage that Donald held, including one lap that was a full one-second quicker on the stopwatch. Once there, Jarsocrak immediately went to work on Donald to retake the lead. The duo went side-by-side for a number of corners, with Jarsocrak getting the worse of it, spinning at the top of the hill. He continued, dropping just one spot to top qualifier Cal Stewart (Franklin / Merlin). Unfortunately, Stewart spun that next lap at turn three, ending his hope at a chance for the victory. Jarsocrak was promoted to second, however, too far back from Donald in the closing laps. On the final circuit, Donald went up the hill, however, never coming down the back straight toward the checkered flag. Instead, it was Jarsocrak that emerged as the leader, taking the checkered flag first for the victory. Donald spun down the turn 10 hill, and was unable to return back on the track, giving Alex Bertagnoli (Franklin / Merlin) second with Dario Cangialosi (Kosmic) in third and Armin Cavkusic (Franklin / FA Kart) in fourth. Stewart was classified fifth, upset knowing he could have earned the top spot on the podium. Donald was disqualified from the race for attempting to adjust his pushback nose cone while on the course. 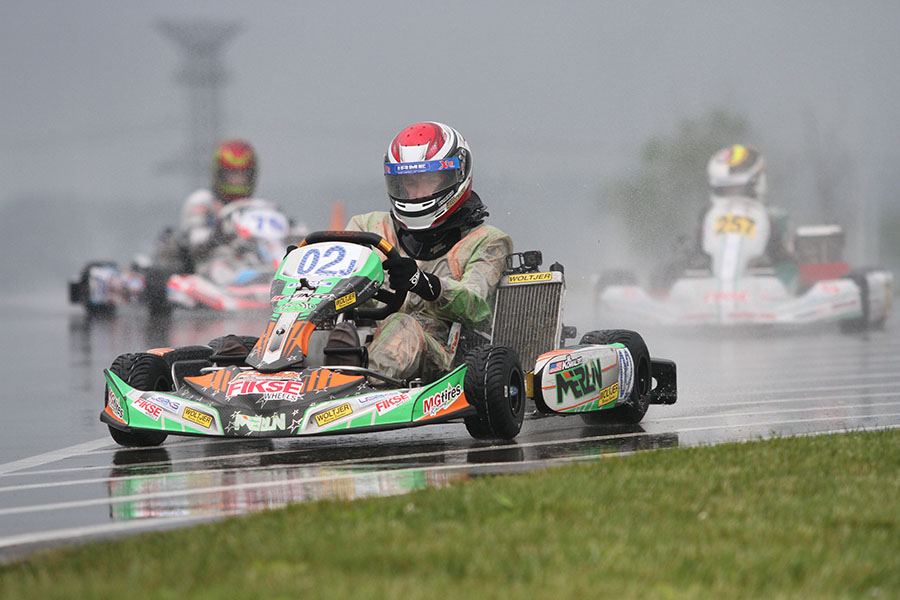 Saturday IAME Junior winner Tyler Gonzalez (SRC / Tony Kart) and Tahlon Yockel (Tony Kart) were the quick drivers in the dry on Saturday. Yockel scored fast time in qualifying with Gonzalez securing the win in the Prefinal. The rain brought in Maks Kowalski, who seems to be getting better with each weekend. The Franklin Motorsports / Merlin driver was close to his first win Saturday, and stepped up in the wet in Sunday’s main event. Gonzalez led the first eight laps before Kowalski took over. From there, Kowalski drove to 3.7-second advantage for the provisional win. Officials assessed a five-second penalty for one-side of the nose cone pushed in, until it was overturned following a protest procedure. Kowalski retained the victory with Gonzalez a solid runner-up result. Colin Neal (MDD / Tony Kart) drove to third ahead of championship leader Austin Schaff (Merlin), as Yockel slipped back to fifth.

Yamaha Junior Saturday winner James Lynch (Tony Kart) remained at the front on Sunday in dry conditions, posting fast time in qualifying and earning the win in the Prefinal. When the wet track hit, Colin Neal (Tony Kart) took over. Neal made up for his unfortunate DNF on Saturday, leading all 20 laps in the wet for his second victory of the season. Matthew Mockabee (Tony Kart) drove to second with Ben Lyda (Merlin) in third, dropping Lynch back to fourth. 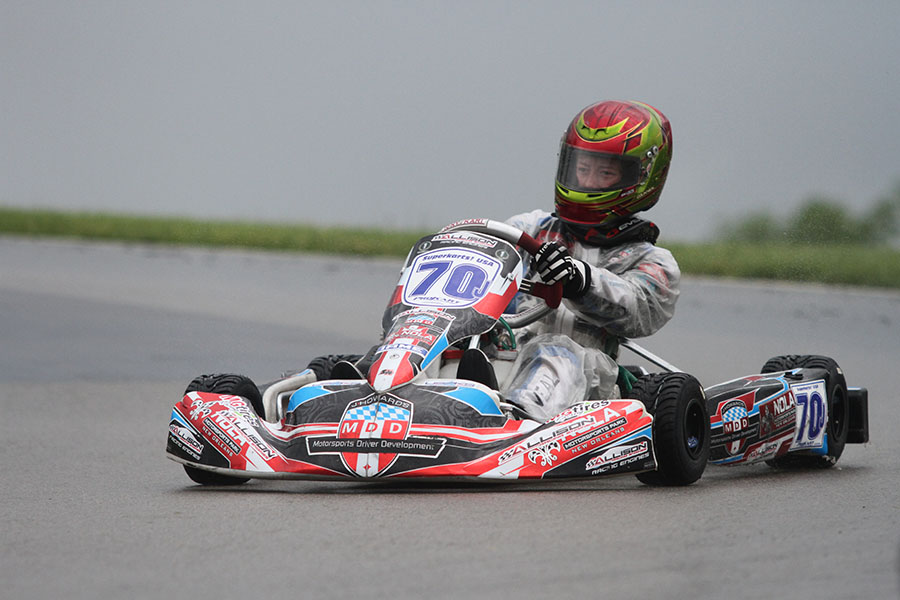 It was judgement day in the IAME Mini Swift category, with an entry to the IAME International Final in LeMans, France this October on the line for the overall weekend winner, courtesy of IAME USA East. Connor Zilisch (Energy) earned the most points through Saturday to be the leader entering Sunday’s round of racing. Zilisch found himself behind after qualifying seventh to Alex Powell (Energy). After working his way to second in a four-wide photo finish in the Prefinal, with Jeremy Fletcher (Tony Kart) taking the win, Zilisch was penalized five seconds for a bumper infraction. That put him to ninth with the field so close throughout the 12-lap battle. This hurt Connor’s chances at the IAME entry, putting Brent Crews (Nitro Kart) in the top spot. Crews, a rainmeister, took advantage of the conditions, jumping out to the lead early and showing the way for the wire-to-wire victory. It was a battle to the end, however, with Lucas Smalec (Merlin) applying pressure on the final circuit. That said, Smalec would not come around from the back end of the track, retiring one lap early. This departure gave Crews a clear path to the checkered flag, with the two wins on the weekend giving him the IAME International Final entry spot, along with the series championship lead. Zilisch worked up to second, getting past Annie Rhule (Energy) on the final circuit. Santiago Trisini (Benik) placed fourth with Alfonso Lombardo (Energy) in fifth.

The Micro Swift podium was not decided until after the race was completed. Mateo Rubio-Luengo (Benik) started the main event ninth after a poor qualifying session and unable to advance in the Prefinal. In the wet, Mateo was on a charge, posting fast laps of the race. He was able to run down the lead group of Frankie Iadevaia (Nitro Kart), Caleb Gafrarar (Parolin) and Christian Miles (Formula K). Once he got there, he quickly went past Miles and Gafrarar, and then Iadevaia for the lead as just prior to the white flag. No one could match his pace, with Mateo reaching the checkered flag first. Rubio-Luengo however was handed a 10-second penalty for the pushback bumper, thus dropping him down to fourth on the podium and giving Iadevaia the victory, his second on the year. Miles was classified runner-up with Gafrarar in third. Sofia d’Arrigo (Nitro Kart) completed the top-five. 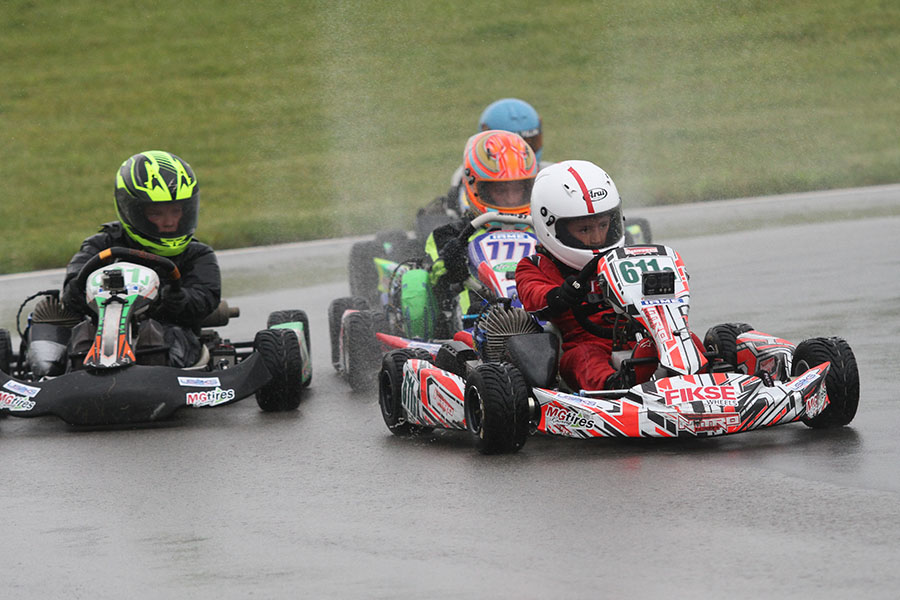 Zilisch (Energy) made it two-for-two in the Yamaha Cadet division on Sunday. It was not an easy run, as Zilisch fought with Danny Dyszelski (Benik) early in the day. Dyszelski earned fast time in qualifying and Zilisch was on the verge of the Prefinal win until Dyszelski slipped past in the final corner as the rain just began before the lunch break, making it a slick last lap. Dyszelski took the race win, however, was not able to keep pace in the wet for the Final. Zilisch jumped out to the lead and went wire-to-wire for the victory. Annie Rhule (Energy) was a solid second ahead of Nico Montileone (Top Kart), who was removed from the results for not having the tires scanned. That promoted Christian Miles (OK-1) to third ahead of Mateo Rubio-Luengo (Benik), who was assessed a 10-second penalty for bumper infraction. Sebastian Ng (Nitro Kart) made up the top-five.

The 2017 United States Pro Kart Series continues next month as the program visits the New Castle Motorsports Park on July 28-30. 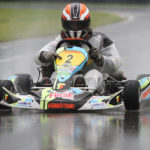