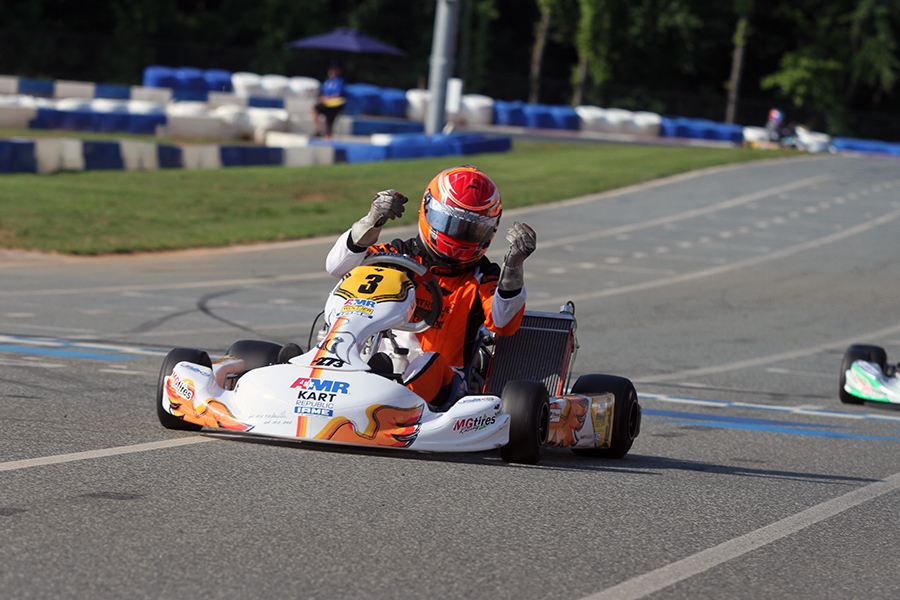 The 2018 United States Pro Kart Series – presented by MG Tires and Nitro Kart – reached the halfway point with Round Three contested on Saturday at the GoPro Motorplex in Mooresville, North Carolina. A very hot day challenged both the competitors and the staff working the busy day of racing that including qualifying, two rounds of heat races and the main events. The competition was close all day, with no real dominating performance until the final checkered flag waved to decide the victors in the seven IAME categories.

There were two sweeps on the day, one of them in the IAME Pro division featuring a field of 30 drivers. Defending champion Brandon Jarsocrak jumped back into his winning ways with a solid performance to sweep the action. Jarsocrak (KartSport North America / Kart Republic) set fast time in qualifying and won both heat races before leading the majority of the laps in Final. After an early challenge from Austin Garrison (Fullerton), Jarsocrak drove away to a solid lead while Senior rookie Austin Schaff (FMS / Merlin) attempted to run him down. ‘Money’ was able to match the pace in the late laps, holding on to earn his first victory of the season at USPKS competition. Schaff earned his first podium of the year in while Armin Cavkusic (FMS / FA Kart) completed the podium. Garrison dropped to fourth with Alex Bertagnoli (FMS / Kart Republic) earning fifth while recording fast lap of the race. 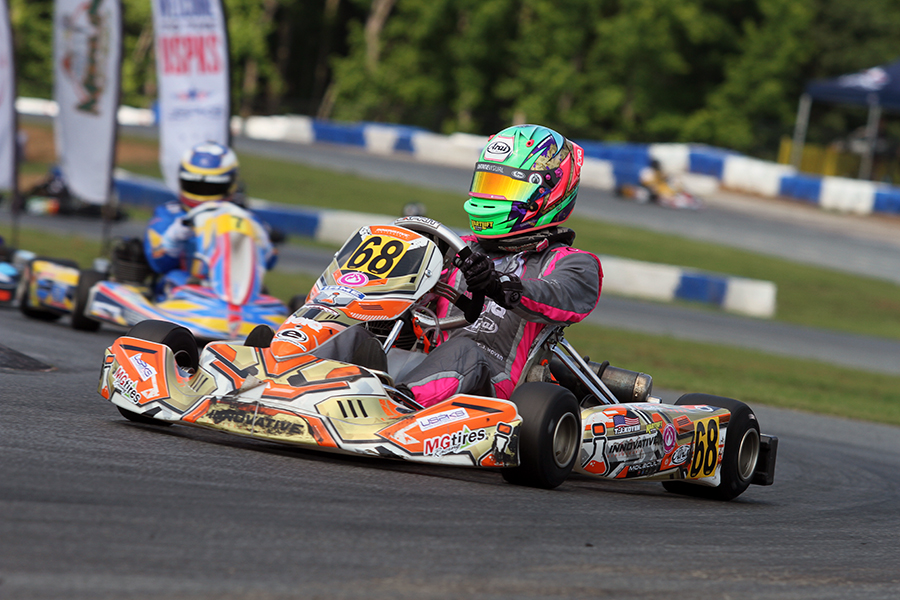 TJ Koyen has competed at the USPKS since its inception, unable to claim the top step of the podium over the first five seasons in IAME and Yamaha competition. Koyen (Innovative / Exprit) was among the top contenders throughout the day, earning a heat race win. Contact in Heat #2 with polesitter Emory Lyda (Merlin) put him seventh on the grid for the Final behind race winner Mike McAndrews (Fullerton) on the pole position. McAndrews led early until Luke Wallace (FA Kart) took over the point. By that time, Koyen worked his way into the fourth position, making quick work of the top three that included Dusty Davis (FA Kart). Koyen took over the lead and was able to establish a solid lead in just one circuit. Davis worked past McAndrews and attempted to run down Koyen. The veteran responded with some quick laps under the 51-second mark in the closing laps to maintain the lead and claim his first USPKS victory. Davis ran to second with McAndrews in third, claiming fast lap of the race. Point leader Zach Hollingshead (OGP / Tony Kart) bounced back from a tough qualifying effort in 17th to end up fourth, just ahead of Colton Ramsey (Innovative / Kart Republic).

The second sweep of the day belonged to Laurentiu Mardan in the IAME Masters class. The former series winner put in a solid performance on the day to earn maximum points in a sweep of Round Three. Mardan (Tecno) felt challenge in the final after earning fast time in qualifying and the two heat races, with Scott Roberts (Tony Kart) and Scott Kopp (Exprit) on his bumper. Mardan eventually pulled away, going on to the victory, his first of 2018. Roberts retired lap nine after contact, allowing Kopp to reach the checkered flag in second. A fuel tank issue early in the race for Kopp allowed fuel to escape his tank, and put him just under the minimum weight at the scales. That awarded second place to Logan Cozzie (Top Kart) with Danny Robertson (Tony Kart) completing the podium. John Robicheaux (Kosmic) was fourth with Cristian Vomir (Tecno) fifth. 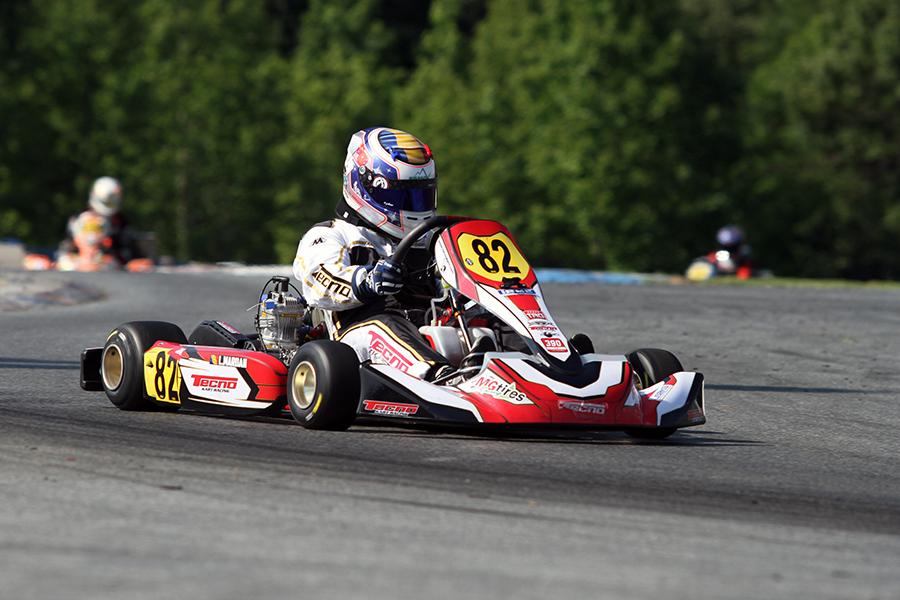 There was no clear cut driver in the IAME Junior division, with Jeremy Fairbairn (Kosmic) and Luca Mars (Kosmic) taking their turns at the point. The main event saw Mars get shuffled back down to ninth early on as nearly the entire field made up the lead pack. Fairbairn and Matthew Duncovich (Kart Republic) got away. The two swapped the lead a number of times while Mars knifed his way back forward. Fairbairn was able to secure the lead on the final lap, holding off the challenge from Duncovich to secure his first victory of the season. Mars got himself back up to third with fast laps of the race with top qualifier Nicholas Terlecki (Merlin) in fourth and Hayden Jones (Tony Kart) in fifth.

A red flag during the KA100 Junior main event shook things up. Tyler Wettengal (Kart Republic) was among the front runners and while lead got spun sideways, sitting on the exit of turn nine sideways. Jacob Graham (Kosmic) had no where to go, making hard contact and flipping over. Officials brought out the red flag immediately, however, it was Wettengal that needed the medical attention. Graham was up and alert quickly while Tyler remained in his kart needing medical attention. He appeared to have received a broken arm and was transported to the hospital. The race resumed with Gray Leadbetter (Tony Kart) out front with Luca Mars (FA Kart) and Donald Whorton II (FA Kart). Whorton lost the draft, while the other two battled to the very end. Leadbetter made her move in the final corner, drifting too wide and unable to continue her momentum on the exit of the corner. It allowed Mars to drag race the line and score the victory by two thousandths of a second. Whorton had third locked up while Hayden Jones (Kosmic) in fourth and William Cox (Tony Kart) in fifth. 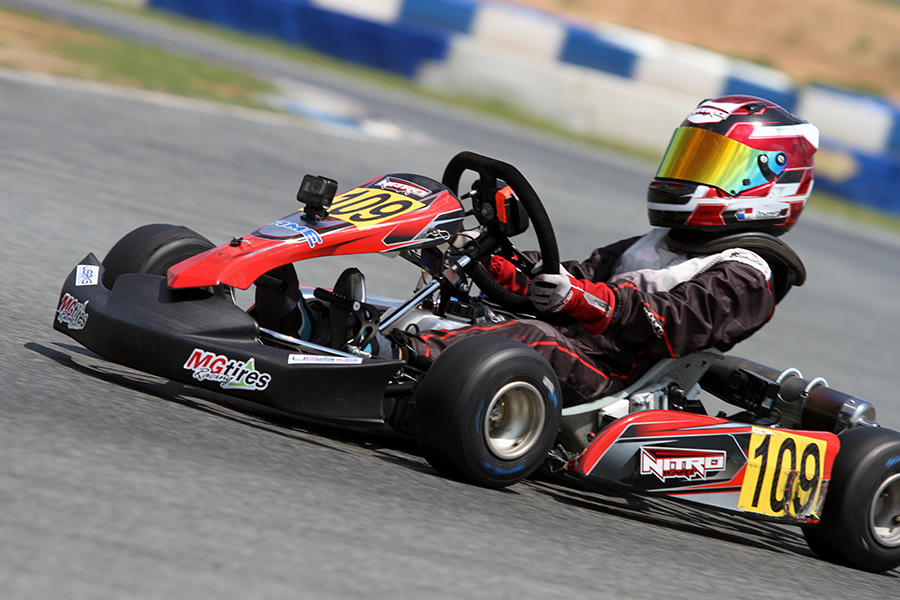 Nitro Kart dominated the day in the Cadet divisions. Sebastian Ng grabbed his first win in the Mini Swift category. After qualifying fourth, Ng (Nitro Kart) won the opening heat race before Brett Crews (Nitro Kart) won the second. At the start of the Final, Ng was able to break away from the 18-kart field with Adam Brickley (Energy) on his bumper. The two pulled away as the rest of the pack battled hard for third. Brickley gave one last effort on the final lap, including the fast lap of the race, however, Ng reached the checkered flag first. Paige Crawford (Benik) was able to escape the field, running third but unable to reel in the leaders. Christian Miles (Formula K) was 15th in qualifying and started in the same position for the main event, racing his way forward to fourth with Jace Park (Parolin) following him through from 16th to place fifth.

Gavan Boschele and Ben Maier ran away throughout the day in the Micro Swift category. The two Nitro Kart driver teamed up, and were able to pull away during each racing session to decide the win between themselves. Gavan took Heat #1 while Maier won Heat #2, with Boschele earning the pole position. Maier stayed glued to Boschele’s bumper until the final circuit, taking the lead at the Monza. Gavan tried on the final corner, unsuccessfully as Maier reached the line first for his second win of the season. Max Garcia (Kart Republic) won the battle for the third over Caleb Gafrarar (Parolin) with Hoyt Mohr (Nitro Kart) overcoming no qualifying laps to advance from 17th at the start of the day to fifth. 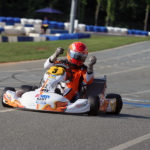