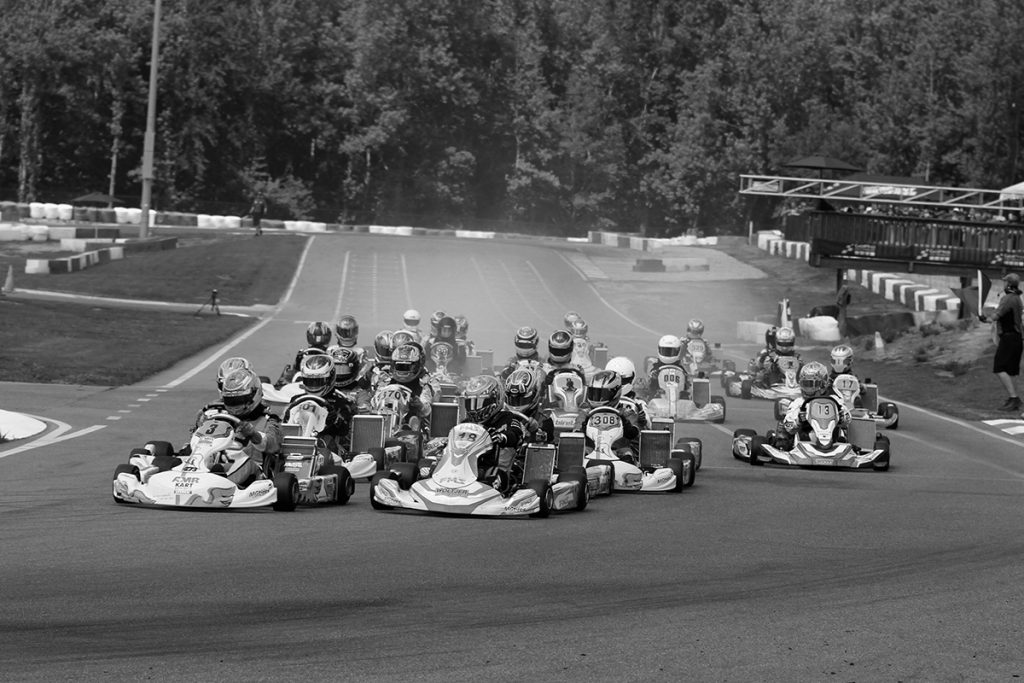 The United States Pro Kart Series presented by MG Tires resumes its 2019 season this weekend with the Carolina Grand Prix at GoPro Motorplex. Rounds Three and Four is the midway point for the seventh season of the IAME program, with seven categories welcoming what could be the largest event in series history. Pre-registration numbers reached 170 mark, putting it just eight entries shy of the 178 record established at GoPro in 2015. The Mooresville, North Carolina facility has been part of the USPKS program since the beginning, hosting the inaugural event in April 2013 and welcoming one event each year since.

eKartingNews.com is back for the seventh year with United States Pro Kart Series to provide industry-leading coverage from each of the three events for the 2019 season. Those karting enthusiasts not in attendance can listen from home or on the road to the EKN Live broadcast page at www.ekartingnews.com/live with Tim Koyen providing the play-by-play call. Daily reports and updates on the EKN Social Media network will fill up your timeline throughout the weekend. 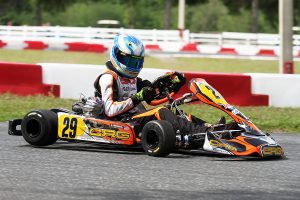 Numbers reached the 30-driver mark once again in Ocala, making it three straight since GoPro of 2018. This weekend will make it four with 32 drivers already registered to compete in Mooresville. Leading the way in Florida were Austin Garrison and Zach Hollingshead. The two defended their respective wins from the 2018 event, with Garrison now with CRG Nordam and Hollingshead with TB Kart USA. They hold the top two positions in the championship chase, with Garrison out front by 45 points.

Winning both rounds at GoPro last year is two-time defending champion Brandon Jarsocrak. Since Ocala, he has moved to the Mike Doty Racing camp aboard a Tony Kart and is coming off top-fiver performances at the SpringNationals. New teammate Josh Green (MDR / Kosmic) was runner-up in Ocala on Sunday, currently sitting fourth in the standings, back by only 67 points. Jarsocrak is ninth, 174 points behind Garrison. 2016 USPKS champion Brandon Lemke (Franklin / Merlin) is making his 2019 USPKS debut, coming off four straight WKA wins, including two at GoPro. It will be a busy weekend for Lemke as he will spend Friday two hours away from Mooresville in South Carolina competing at Anderson Motor Speedway in a Late Model before heading to GoPro. Two-time USPKS champion Alex Bertagnoli is also set for his USPKS debut in 2019, rejoining the KartSport North America / Kart Republic team. One to watch throughout the weekend is Ashley Rogero (Tony Kart), who is always a threat when competing at her home track. 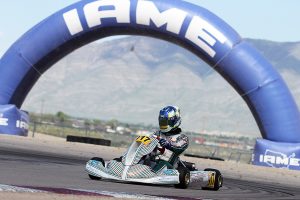 The one category that was impacted by the quick rain storm in Ocala was the KA100 Senior division. A total of six different drivers stood on the podium during the weekend, with Blake Hunt leaving as the point leader. The 2018 WKA champion was on a DR Kart in Ocala, moving to Tony Kart since, coming off three wins at the GoPro Karting Challenge. Colton Ramsey (Innovative / Exprit) and Josh Hotz (Franklin / Merlin) split the victories on the weekend and sit second and third. Hotz grabbed that elusive USPKC triumph in the wet race on Saturday with Ramsey walking away to his second career USPKS victory. Jack Dorsey (Comet / FA Kart), Emory Lyda (Nitro Kart) and Adam Crepin (Franklin / Merlin) complete the six drivers on the podium in Ocala. Dorsey sits sixth in points with Lyda seventh and Crepin ninth. Add in female drivers Arie Venberg (Franklin / Kosmic) and Julia Boos (Kaos / Kosmic) holding fourth and fifth, a number of drivers remain in the championship chase.

The field is just short of 30 with 27 driver pre-entered for the weekend. Making series debuts on the year include Garrett Adams (Comet / FA Kart), making the jump to the Senior level this weekend. Local drivers will be challenging for podiums, including Brooke Nachtmann (SSC / Tony Kart), Luke Stroud (TT / CompKart) Winston Workman (NSR / Top Kart) and Byron Daley (Fullerton). One driver to really watch is Austin Osborne (IRM / Kosmic) as the SKUSA Pro Tour race winner makes the trip from Texas for his USPKS debut.
< 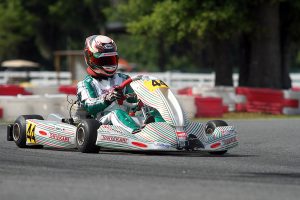 Texas driver John Burke (Supertune / Tony Kart) made his USPKS debut memorable with a solid victory and runner-up in Ocala to kick off the X30 Junior title chase. Burke left with the $2,500 prize and the championship lead with his performance at the Southern Grand Prix. Burke holds an 83-point advantage heading into Mooresville, with Kyffin Simpson (SCR / Tony Kart) as the lead challenger. The New Yorker recorded one podium finish in Ocala. In fact, Burke was the only driver to stand on the podium both days. Brent Crews (KSNA / Kart Republic) and Matthew Christensen (Supertune / Tony Kart) were on the podium as well in Ocala, currently sitting third and seventh in the standings. Connor Zilisch (TF / Tony Kart) was the other winner from the weekend, recording a DNF while leading on Sunday and finds himself fifth in the standings heading to his home track. Paul Bocuse (SCR / Tony Kart) is fourth with two top-five results in Ocala. GoPro will see the 2019 debuts for Logan Adams (Comet / FA Kart) and top Mini driver Jack Jeffers (Orsolon / Tony Kart) making the move up.

Many of the same contenders from X30 are in the hunt for the KA100 Junior category. Brent Crews (KSNA / Kart Republic) scored victory in Ocala to leave as the championship leader. He leads fellow North Carolina driver Connor Zilisch (TF / Tony Kart) by 61 points as they look to continue leading the standings after defending their home track. Making it three NC drivers at the top of the standings is Tyler Wettengel (KSNA / FA Kart), who was runner-up to Crews in Ocala. Jeremy Fletcher (Zanella / Tony Kart) won in his Junior debut in Ocala in KA100, but is not listed to compete in GoPro. His absence makes it four NC drivers at the top of the standings heading to GoPro with Westin Workman (TT / CompKart) with two top-five results in Ocala. 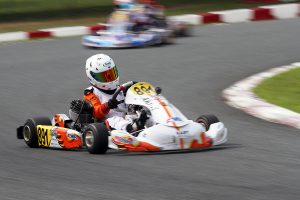 The X30 Masters division remains one of the most competitive divisions at USPKS. The title chase has the top two separated by only 29 points with David Galowina (CompKart) and Danny Robertson (OGP / Tony Kart). Each grabbed a victory in Ocala with Galowina earning the most points on the weekend in his class debut. Scott Roberts (SCR / Tony Kart) was among the quick drivers all weekend, but was shut out again at his home track for victory. He trails by only 40 points in the standings with Sunday runner-up Darin Marcus (Fullerton) sitting fourth. Winners at last year’s GoPro include Roberts and defending champion Laurentiu Mardan (TecnoKart USA). Mardan sits sixth in the standings, one spot behind Scott Kopp (Innovative / Exprit). Local driver Logan Cozzie (TT / CompKart) was on the podium both days last year, and will have a late start Saturday as he will be attending his high school graduation in the morning hours before returning to GoPro in time for the Prefinal. Joining the action on the weekend is another NC resident, former IndyCar, NASCAR and Formula One driver Max Papis. ‘Mad Max’ won the 2013 Rotax Grand Nationals at GoPro, and will be an exciting addition to the field this weekend.

Defending Mini Swift champion Kai Sorensen remains at the top of the standings. Sorensen (Supertune / Tony Kart) swept the opening round, landing on the podium on Sunday in Ocala to leave with a 40-point advantage in the title chase. Teammate Anderson Leonard and Jorge Ortiz sit second and third. Leonard was on the podium both days at the opener, third and second, while Ortiz won Round Two. Michael Costello (Benik) broke up the podium sweep for Supertune, placing runner-up on Saturday. Costello is fifth in the championship chase with Miguel Costa (Parolin) sitting fourth in the standings. 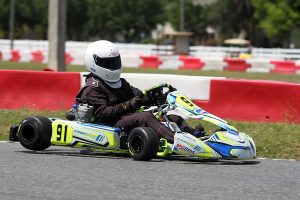 Winning both main events in Micro Swift at the USPKS opener was Spencer Conrad. It was a challenge for the Nitro Kart driver, coming from fourth on the grid both days to claim the victories. Runner-up both days was Karsyn Walters (Tony Kart), however, the Florida driver is not scheduled to compete in Mooresville. That puts Aryton Grim (Nitro Kart) as the top challenger in the standings, back by 60 points. Carson Weinberg (Nitro Kart) is another 61 points back. Jack Iliffe (Tony Kart) was among the contenders in Ocala, suffered a broken wrist two weeks ago and is still scheduled to compete this weekend. 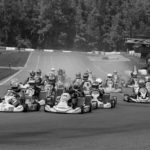