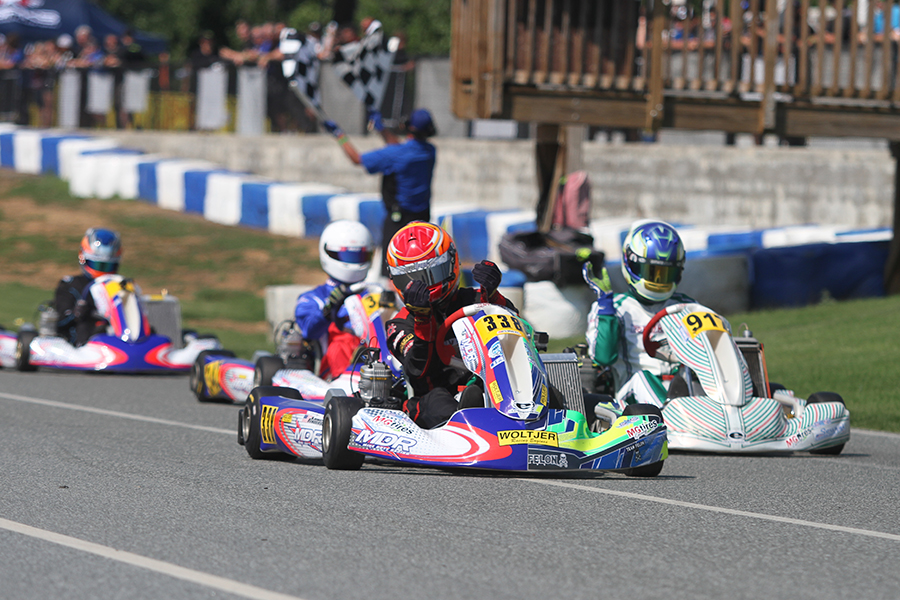 The United States Pro Kart Series closed out the Carolina Grand Prix at the GoPro Motorplex on Sunday under perfect weather conditions. The temperature rose higher than it had all weekend long at the Mooresville, North Carolina facility, with the action heating up for Round Four of the championship chase. All seven IAME categories provided drama on the day, with seven different winners from the previous day.

The X30 Pro division has welcomed four different winners in four rounds of racing. Two-time defending champion Brandon Jarsocrak (MDR / Tony Kart) notched his first race win for the series on the year with a sweep of Sunday’s action. Jarsocrak set fast time in qualifying once again, this time as the only driver below the 48-second mark. Aside from former series champion Brandon Lemke (Franklin / Merlin) taking the lead early in the Prefinal. Jarsocrak showed the way for the remainder of the day. ‘Money’ won the Prefinal to lead the field to the green in the main event, leading all 24 laps under heavy pressure the entire distance. Former teammate Blake Hunt (Tony Kart) stayed on the bumper throughout the race, unable to make a move for the lead. Hunt grabbed his second runner-up finish on the weekend. Saturday winner Josh Green (MDR / Kosmic) and Pauly Massimino (MDR / Kosmic) were there the entire race, waiting for their opportunity to strike, ending up third and fourth. Ashley Rogero (Tony Kart) stole the perfect score from Jarsocrak, setting fast lap of the main event in her advancement from ninth to fifth. Jarsocrak took home the $2,500 payday for most points on the weekend with Green earning $1,250 for second and $750 to Hunt. 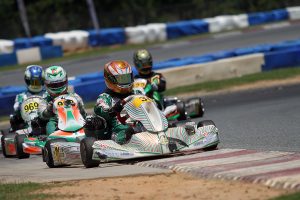 GoPro Challenge competitor Brooke Nachtmann (Tony Kart) proved to have the speed at every major event that has visited the facility year after year. Things would never unfold in her favor, leaving that elusive big victory on the table to grab. Nachtmann put in a stellar and complete performance on Sunday to sweep the action in KA100 Senior. She set the fast lap of qualifying, edging out Texan Austin Osborne (IRM / Kosmic) by 24 thousandths of a second. After getting dropped to fourth in the Prefinal, she drove her way back to the front and the win in the Prefinal. The start to the Final was even worse, falling to sixth after the opening lap. Thankfully, the lead group fought heavily in the opening laps of the race where Nachtmann knifed her way back up to the lead by lap nine. From there, she posted fast laps of the race to establish a 2.8-second advantage at the checkered flag to record her first USPKS victory. The fight for second went down to the wire as Matthew Mockabee (Comet / Kart Republic) held off Blake Hunt (Tony Kart). Hunt ended the weekend with four podiums in four main events in his double duty effort. Emory Lyda (Nitro Kart) came out with the fourth position ahead of early leader and Round One winner Josh Hotz (Franklin / Merlin). 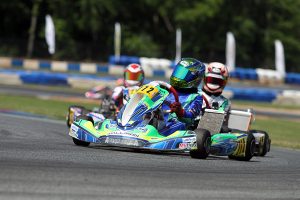 Connor Zilisch (LAK / Tony Kart) had to fight off three different drivers to claim his second victory in the X30 Junior class. Zilisch was able to win the Prefinal, fighting off John Burke (Supertune / Tony Kart) after top qualifier Brent Crews (KSNA / FA Kart) retired early. Burke took the lead from Zilisch early in the Final until he regained the spot. Then came Jace Park (SCR / Tony Kart) from fifth to take the lead for a few circuits when a charging Crews arrived at the front. Lap 15, Crews jumped to the lead with Zilisch following through. The two worked together to get away from the rest of the drivers, establishing a final lap duel. Their back and forth on the final lap allowed Burke to close up in the final few corners. Zilisch was able to win the race to the finish line, earning the victory by seven thousandths of a second ahead of Burke with Crews settling for third after starting 20th. Kyffin Simpson (SCR / Tony Kart) ended up fourth with Saturday winner Jeremy Fletcher (Zanella / Tony Kart) in fifth. It was Fletcher that won the tie-breaker for the weekend points prize package, taking home the $2,500 payday. 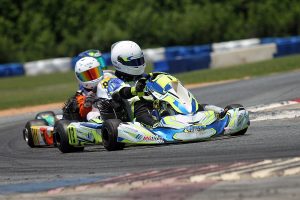 It was nearly a two win weekend for both Zilisch and Crews, until Westin Workman (Timmy Tech / CompKart) put a stop to that in KA100 Junior. Zilisch (LAK / Tony Kart) set fast time in qualifying while Crews (KSNA / Kart Republic) took the win in the Prefinal. Workman was solid early in the Final and jumped to the lead. Crews and Zilisch jumped on his bumper and the trio pulled away. With two laps to go, the chess game began with each fighting for the top spot. The battle ended with a drag race to the line with Workman reaching the checkered flag first, ahead of Crews by 16 thousandths. Workman was also credited with fast lap of the race. Zilisch made it three-wide, ending up in the third spot to complete the podium. Tyler Wettengel (KSNA / FA Kart) and Erikson Evans (DCT / Kosmic) rounded out the top-five. 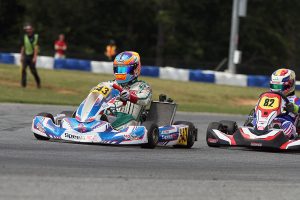 It was an interesting day in the X30 Masters division with how the day unfolded for a number of drivers. Attrition was the name of the game, and avoiding mistakes on the track. Saturday winner Scott Kopp (Innovative / Exprit) made no mistakes in qualifying, setting fast time and edging out defending champion Laurentiu Mardan (Tecno) by two thousandths of a second. Early in the Prefinal was a shuffle for the lead, and on lap five, contact began with Scott Roberts (SCR / Tony Kart) and Darin Marcus (Fullerton). Kopp and Scot Carapellatti (Tony Kart) got the worst of it, ending up on the sidelines with Marcus retiring after 11 laps. This gave Mardan a clean run to the win. Roberts ended up ninth, and was quick on the charge in the Final. Roberts was into the second spot by lap seven, and ran down Mardan by lap 15. The following circuit, Roberts took over the lead and ran away to his first victory of the season. Mardan settled for second, helping boost his title defense as teammate Cristian Vomir (Tecno) completed the podium. John Robicheaux (Kosmic) came out in fourth. Kopp was the quickest kart on the track, but two separate incidents in front of him slowed his pace back toward the front, ending up fifth. 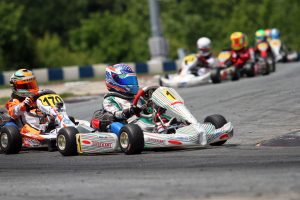 Defending Mini Swift champion Kai Sorensen (Tony Kart) became the first two-time winner on the year after a grueling fight on Sunday. Sorensen set the fast time in qualifying, better by 21 thousandths over Parker DeLong (Nitro Kart) where the top nine drivers were separated by less than one tenth of a second. A wild Prefinal ended with Cameron Weinberg (Nitro Kart) earning the win with Sorensen holding onto second. After early shuffling, Sorensen and Saturday winner Christian Miles (Kart Republic) established themselves as the top two, and pulled away from the rest of the field. On the final circuit, Sorensen was able to hold back Miles in the final corner, reaching the line first to earn the victory. Max Garcia (Kart Republic) grabbed his first podium of the season in third with DeLong and Michael Costello (Benik) completing the top-five. 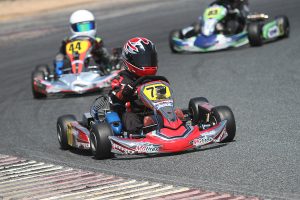 Spencer Conrad was able to shake off the troubles from Saturday to record his third USPKS victory on Sunday in Micro Swift. Conrad ran into trouble in the Prefinal, ending the race in 12th. Saturday winner Aryton Grim (Nitro Kart) won the race over Texan Jack Illiffe (Tony Kart). Conrad fought his way forward quickly, reaching the top spot by lap six. He and Grim swapped the lead before Illiffe attempted his run to beat Conrad. In the end, Conrad was able to reach the line first for the victory with Illiffe earning his first podium in the series with a runner-up. Grim ended the day in third, beating out Hoyt Mohr (Nitro Kart) for the position. Top qualifier James Moss (Benik) finished fifth, but was penalized two position for contact early in the race, promoting Garret Andexler (Kart Republic) to the spot.

The 2019 United States Pro Kart Series will close out next month with the Hoosier Grand Prix, set for July 26-28 at the New Castle Motorsports Park to decide this year’s series champions. 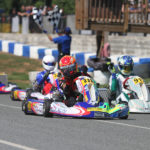