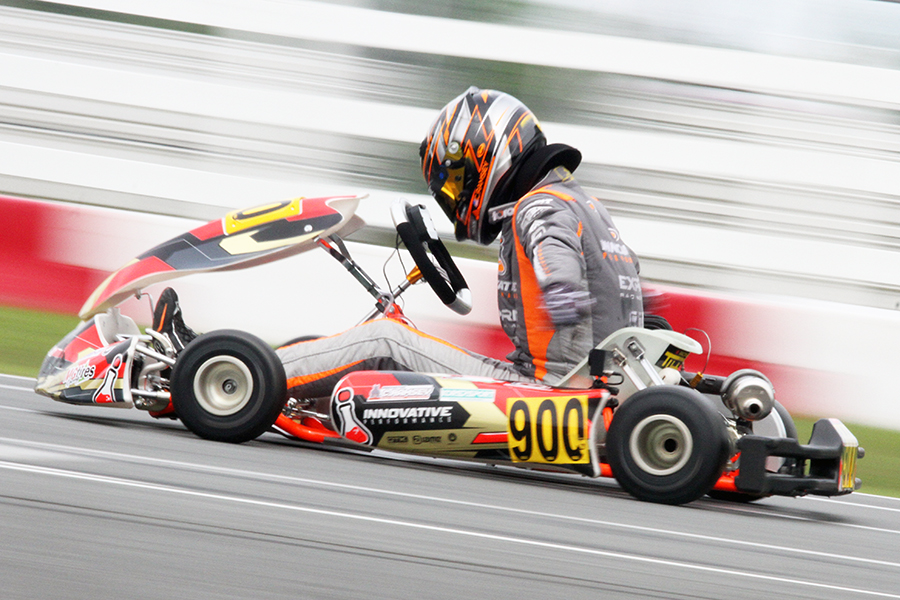 The opening event for the 2019 United States Pro Kart Series completed Sunday at the Ocala Gran Prix with the Southern Grand Prix coming to a close. The Ocala, Florida facility saw bright sunshine throughout the day with no delays for weather, only a red flag in one of the Finals, thankfully with all drivers walking away. The second round of the USPKS championship program saw returning winners along with new faces at the top of the podium to complete the opening event of the seventh season.

Last year’s X30 Pro division saw Austin Garrison and Zach Hollingshead grab wins at the USPKS’ first visit to Ocala. The two local drivers won again this weekend, with Hollingshead emerging victorious today. After Senior rookie Matthew Duncovich (KSNA / Kart Republic) set fast time in qualifying, Colin Warren (TB Kart) jumped out in front and held off Saturday winner Austin Garrison (CRG Nordam) for the Prefinal win. The two battled early in the Final, with Hollingshead slipping past both for the lead. From there, the 2018 KA100 Senior champion drove away to secure a second career X30 Pro victory. The battle was for second with Josh Green (MDR / Kosmic) securing that position, unable to challenge Zach late in the race. Xander Clements (DCT / Kosmic) was on a charge for the day. Qualifying 10th, he worked up to fifth in the Prefinal and then set fast time in Final. Sitting fourth on the final lap, he dove inside of Warren for the final podium spot. The two made contact and Warren spun off, as Clements grabbed the third position. Garrison dropped back to fourth with Duncovich able to recover from a poor Prefinal to finish fifth. Warren continued and ended up ninth. 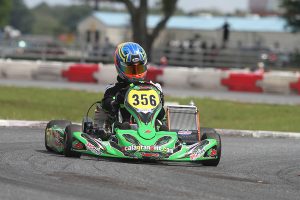 The battle in KA100 Senior came down to two drivers – Colton Ramsey and Blake Hunt. Ramsey (Innovative / Exprit) was second to Julia Boos (Kaos / Kosmic) in qualifying and then second to Hunt (DR Kart) in the Prefinal. Hunt led the opening two laps of the main event before Ramsey took over the lead. From there, Ramsey set the pace, including the quickest lap of the Final, to earn his first victory of 2019. Hunt settled for second with a great battle for third behind them. Boos secured the spot at the checkered flag, but a pushback bumper penalty dropped her to fifth, promoting veteran Adam Crepin (Merlin) to the third step with Arie Venberg (Franklin / Kosmic) to fourth. Saturday winner Josh Hotz (Franklin / Merlin) slipped back to sixth after running third at one point in the 26-lap run.

There is probably no better way to celebrate your 14th birthday then to win your first USPKS X30 Junior main event. John Burke (Supertune / Tony Kart) did both by sweeping the action on Sunday. By just one thousandths of a second, Burke edged out Brent Crews (KSNA / Kart Republic) for fast time in qualifying, and then held off Connor Zilisch (LAK / Tony Kart) for the win in the Prefinal. Zilisch jumped out to the lead in the Final, but an issue on track put him into the marbles, and eventually out of the race on lap 19. That handed the top spot to Burke, running unchallenged to the checkered flag. Matthew Christensen jumped from CRG to Tony Kart overnight, coming from 11th after qualifying to the second step of the podium, beating out Kyffin Simpson (SCR / Tony Kart) for the spot. Paul Bocuse (SCR / Tony Kart) was fourth with Crews ending up fifth. 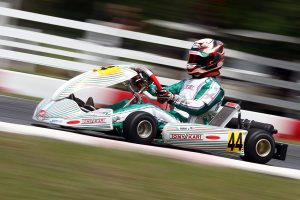 KA100 Junior was another sweep, with Brent Crews (KSNA / Kart Republic) able to earn P1 in all sessions for the category. Crews overcame a red flag in the main event, fending off challenges at the restart and driving away to his first USPKS victory in the category. The fight for second went down to the final corner, with Dylan Christie (MDR / Kosmic) and Kyffin Simpson (SCR / Tony Kart) coming together. This allowed Connor Zilisch (LAK / Tony Kart) to cross the line second, only to have a pushback bumper penalty drop him to sixth. That promoted Tyler Wettengel (KSNA / FA Kart) to second and Lucas Smalec (Franklin / Merlin) to third. Chloe Chambers (MDR / Kosmic) and Westin Workman (CompKart) completed the top-five.

The X30 Masters class welcomed another new winner to the division with Danny Robertson (OGP / Tony Kart) leading all 26 laps of the Final. Robertson started third, but came around in first on the opening lap with top qualifier and Prefinal winner Scott Roberts (SCR / Tony Kart) having an issue and dropping to the tail of the field. Saturday winner started second and was third with Darin Marcus (Fullerton) up to second. They ran that way the remainder of the race, with Robertson tasting the thrill of victory and providing plenty of podium hugs for everyone. Marcus settled for second with Galowina posting fast lap of the race in third, while also pulling double duty by running X30 Pro all weekend as well. Laurentiu Mardan (Tecno) was fourth with last year winner Todd Shambo (CompKart) in fifth. Roberts worked his way up to sixth by the checkered flag. 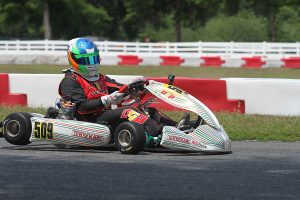 One of the toughest sweeps of the weekend came in the Mini Swift division. Jorge Ortiz (Tony Kart) set fast time in qualifying, edging out Anderson Leonard (Tony Kart) and defending champion Kai Sorensen (Tony Kart) by nine hundredths of a second. Ortiz held off Sorensen for the win in the Prefinal, and Leonard joined them in the fight for the Final victory. Each took a turn at the point with Ortiz going from third to first in the last two laps, grabbing his first USPKS victory. Leonard and Sorensen joined him on the podium with Miguel Costa (Parolin) posting fast laps of the race in fourth ahead of Christian Miles (Kart Republic).

It appeared to be a sweep in the Micro Swift class as well, with birthday driver Jack Iliffe (Tony Kart) setting fast time in qualifying and winning the Prefinal. Saturday winner Spencer Conrad (Nitro Kart) had other plans. Conrad started fourth and knifed his way to the lead by the halfway point. From there, he checked out with fast laps of the race to double up on the weekend with a 2.7-second advantage at the checkered flag. Karsyn Walters (Tony Kart) added another runner-up finish to her weekend with Aryton Grim (Nitro Kart) joining them on the podium. Kai Johnson (Energy) advanced from 10th to fourth with Nash Gierke (Kart Republic) completing the top-five. Iliffe dropped back to eight at the end of the 24-lap main event.

The United States Pro Kart Series will return to action on June 14-16 for the Carolina Grand Prix at the GoPro Motorplex in Mooresville, NC. 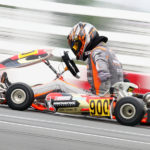