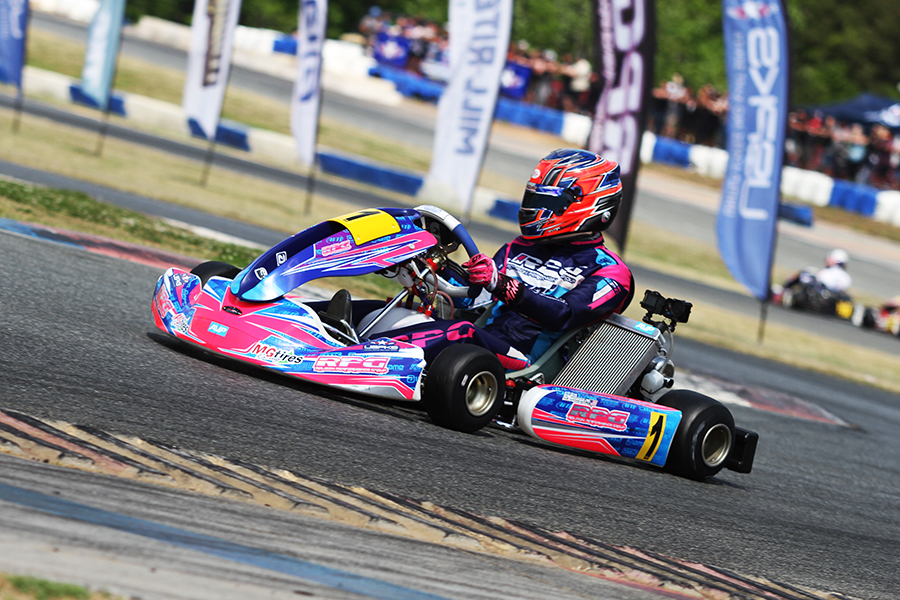 The third round of the 2022 United States Pro Kart Series was contested on Saturday at the GoPro Motorplex. A perfect day of weather at the Mooresville, North Carolina for the first day of racing at the Carolina Grand Prix. The day went a little longer than scheduled with two red flag periods however thankfully all the drivers came away with no major injuries. The Prefinals and Finals were held on the day after qualifying took place at the end of Friday for the seven IAME categories. Rolison Performance Group driver Ryan Norberg was able to claim his third straight in the X30 Pro division while penalties shook up the order in KA100 Senior, giving GWR pilot Jeremy Fletcher his first USPKS victory in the category.

The Franklin Motorsports X30 Pro class saw Pauly Massimino (RPM / Tony Kart) leading the field to the green flag after qualifying on the pole position. A great battle in the Prefinal ended with Massimino in the top position, holding the P1 spot for the start of the Final. Massimino led the opening couple of laps until Norberg, who started third, moved into the top spot. Fighting for second behind him and laps nearly two tenths quicker with each passing allowed Norberg to establish a 3.2-second advantage after 24 laps at the checkered flag. The fight for second lasted until the final inches with Massimino able to hold off Colin Warren (CDR / Kart Republic), a charging Cameron Weinberg (SCR / CRG) and Austin Garrison (SCR / Redspeed). Add in Justin Adakonis (MDR / LN Racing Kart) in sixth, they all within three tenths of each other at the line. Warren moved up 13 spots with Weinberg up 15, posting the fast lap of the race. 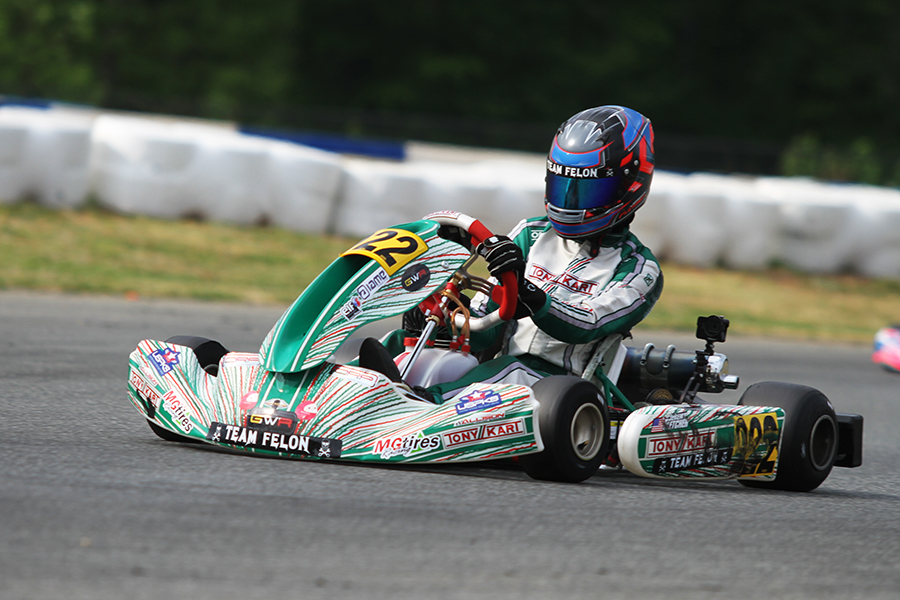 The Mike Doty Racing KA100 Senior class saw top qualifier Pauly Massimino (RPM / Tony Kart) and Chase Hand (RPG / Kosmic) winning the two Prefinals to lead the field to the green flag for the 22-lap Final. Four different drivers led throughout the race, including Massimino, John Burke (Supertune / Tony Kart), Dalton Hanes (Top Kart) and Round Two winner Alex Stanfield. Stanfield led the middle portion of the race with taking the lead on lap 16. They along with Jeremy Fletcher (GWR / Tony Kart) were able to get away from the rest of the field. Stanfield put himself into the lead with two laps remaining, and held off the group to earn the provisional win. A penalty for contact dropped Stanfield off the top of the podium. Fletcher, who finished second, was given a pushback bumper penalty, however that was overturned. That promoted him to the top of the podium for his first win in the category and the third different winner on the season. Massimino moved up to second. Hanes originally crossed the line in fourth but a pushback bumper penalty dropped him down to 10th. Aiden Levy (Harvick Racing / FA Kart) ended up on the podium in third with Stanfield classified fourth. Burke completed the top five with Hand in sixth. 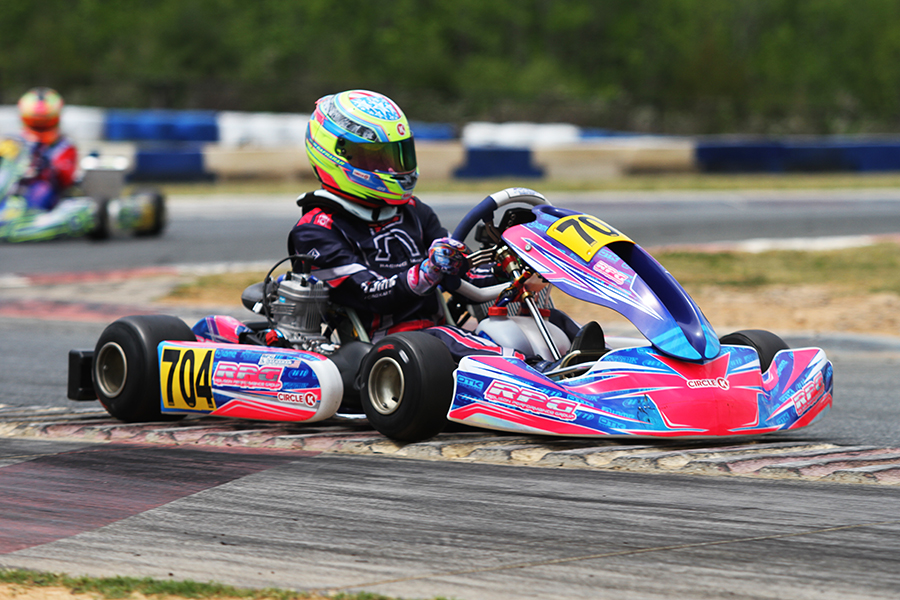 It was a two driver fight in the Rolison Performance Group X30 Junior division. Round One winner Caleb Gafrarar (RPG / Kosmic) and Max Garcia (MPG / WPK) out front and away from the rest of the field. Gafrarar led the majority of the race with Garcia leading from lap 19 to 23. On the final circuit, Garcia ran a strong defensive line except for in the final corner. He left enough room for Gafrarar to dive inside, and win the race to the checkered flag. Sebastian Wheldon (JC / LN Racing Kart) charged up 14 spots to land on the podium in third. Jorge Ortiz (Supertune / Tony Kart) was fourth with Enzo Vidmontiene (Benik / Kosmic) in fifth. 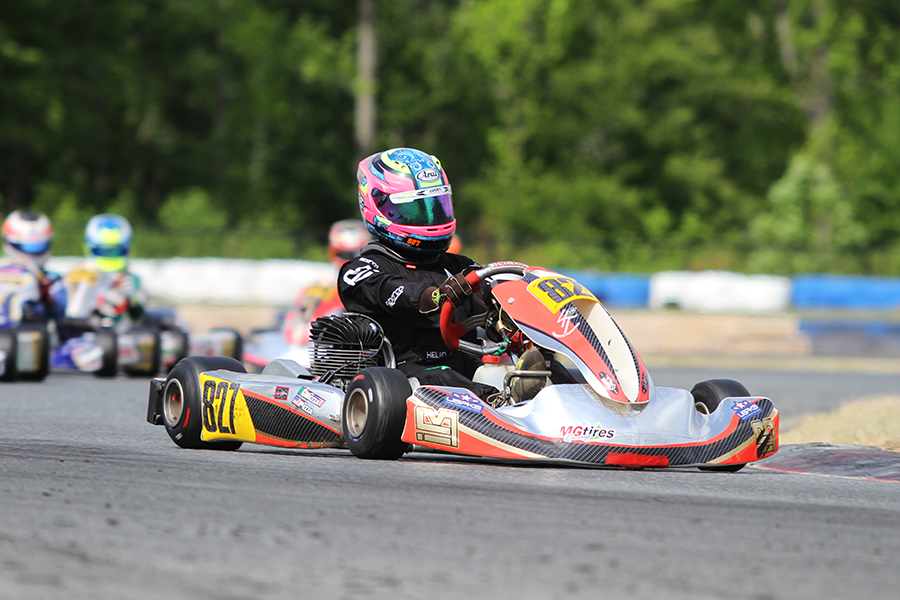 The Timmy Tech KA100 Junior class welcomed a third different winner and a first time victor on the day. Top qualifier Helio Meza (IRM / Tony Kart) won his Prefinal with Round One winner and point leader Max Garcia (MPG / WPK) taking the win in the other. Meza jumped out to a solid lead early in the 22-lap Final. By lap 15, they group caught back up and shuffled him down to third. with Garcia at the point. On lap 18, Meza returned to the point and was able to run to the checkered flag for his first series victory. Garcia was close in second with Cooper Shipman (IRM / Tony Kart) winning the battle for third ahead of Parker DeLong (RPM / Tony Kart) and Round Two victor Steven Miller (CDR / Kosmic). 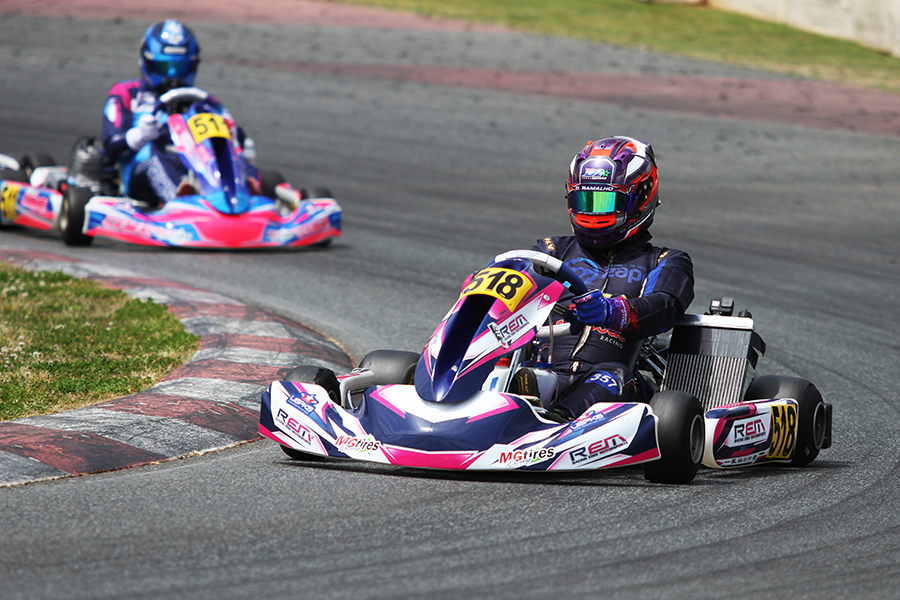 Another driver to make it three straight victories on the USPKS season is Danillo Ramalho (REM / Kosmic), standing on top of the podium in the Speed Concepts Racing X30 Masters. Top qualifier Renato Jader David (Orsolon / Tony Kart) was moved down to third in the Prefinal with Mario Barrios (RPG / Kosmic) taking the win with Ramalho up to second from fourth. By lap four of the Final, Ramalho was into the lead. Fighting for second behind him opened up a gap to the rest of the top challengers. Scott Roberts (SCR / Redspeed) was one of them, and was into second, posting fast laps of the race. He would be unable to close up the gap enough as Ramalho went on to win by 1.4 seconds. Barrios completed the podium with Renato fourth and Martin Stone (REM / Kosmic) fifth. 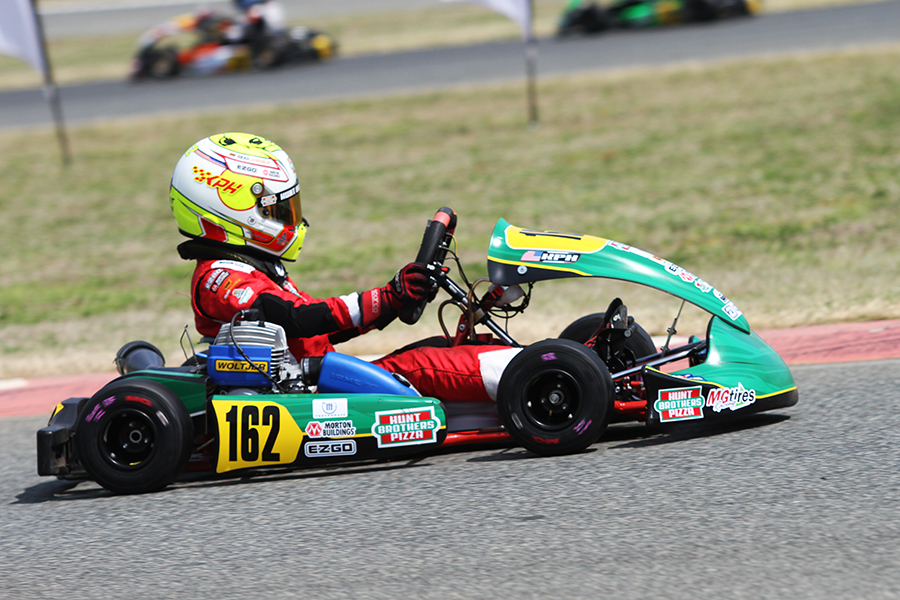 The race in the DNJ International Services Mini Swift class went down to the last lap. Top qualifier and Prefinal winner Keelan Harvick (Harvick / Parolin) was joined by Jack Iliffe (IRM / Parolin), who started seventh. Iliffe took the lead on lap five and led the way until lap 18 when Harvick returned to the point. On the final circuit, Harvick ran a defensive line, and Iliffe tried for an over-under move at the hairpin. Iliffe made hard contact with Harvick’s rear bumper, killing his momentum. That allowed Harvick to drive to the checkered flag for his first victory on the season, and the third different winner. Iliffe suffered a pushback bumper penalty, however, still held onto second with the gap they had over the fight for third. That was taken by Carson Weinberg (SCR / CRG) ahead of Lucas Palacio (TKG / Kart Republic) and Oliver Wheldon (JC / LN Racing Kart) – who posted fast lap of the race. 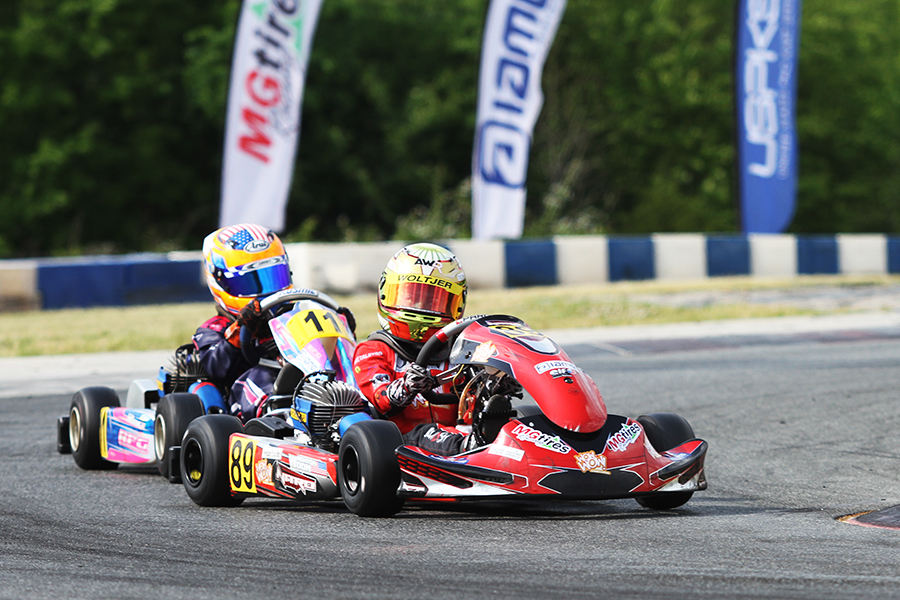 The Team Ferris Racing Micro Swift division also welcomed a first-time winner, and third different driver. Round One victor Marco Sammut (MDR / LN Racing Kart) set fast time in qualifying and won the Prefinal with Ashton Woon (Team Nitro / Parolin) in second. The field was shuffled up at the start of the 20-lap Final with Woon jumping out front and Jackson Gibson (RPG / Kosmic) into second from sixth. They were able to get away from the field with Woon showing the way up until lap 17. Gibson led for one lap before Woon returned to the point. Gibson was unable to make a full attack again and came up short with a run to the checkered flag as Woon crossed the line in first by 66 thousandths. Sammut joined them on the podium in third with Bowen Green (TimmyTech / CompKart) fourth and Benja Fernandez (TKG / Kart Republic) in fifth.

Sunday is Round Four of the 2022 USPKS season and the final day of the Carolina Grand Prix. 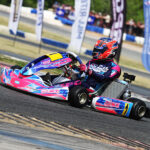