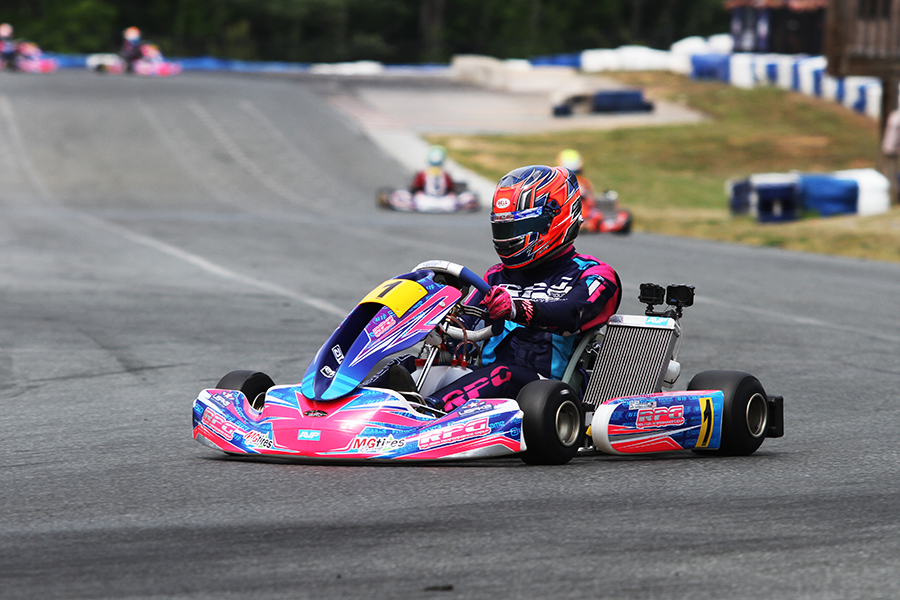 The first half of the 2022 United States Pro Kart Series is completed with the final day of action contested at the Carolina Grand Prix on Sunday. A record turnout at the GoPro Motorplex circuit saw Rounds Three and Four held over the weekend with perfect weather conditions all weekend long. The threat of rain lingered all day Sunday, however, it pushed north and south of the facility to provide a dry race track for the seven IAME categories competing. Defending X30 Pro champion Ryan Norberg has made his bid for a second straight title possible with a fourth straight victory to open up the season while Alex Standfield picked up a second in four rounds to become the new point leader in the KA100 Senior division.

It was not a perfect weekend for Norberg (RPG / Kosmic) in the Franklin Motorsports X30 Pro class. He missed out on fast time in qualifying on Friday with Austin Garrison (SCR / Redspeed) making a return back behind the wheel to post a 47.120 lap in the timed session. Norberg was off by only five hundredths of a second. After getting shuffled back to fourth in the Prefinal early, Norberg fought back to the front and drove away to the win. Norberg took advantage of the pole position for the main event to jump out to the lead with slight pressure from Garrison early on. By lap five, Senior rookie Cameron Weinberg (SCR / CRG) was waved around with Garrison giving up the position to see if the young driver could keep pace. Norberg was just too strong, putting down lap times in the low 48s, all within two tenths of each other until the checkered flag for his fourth victory. Weinberg took home the big runner-up finish with Garrison rounding out the podium. The fight was for fourth with Dalton Hanes (Benik / Tony Kart) improving five spots with Justin Adakonis (MDR / LN Racing Kart) following him through to fifth. 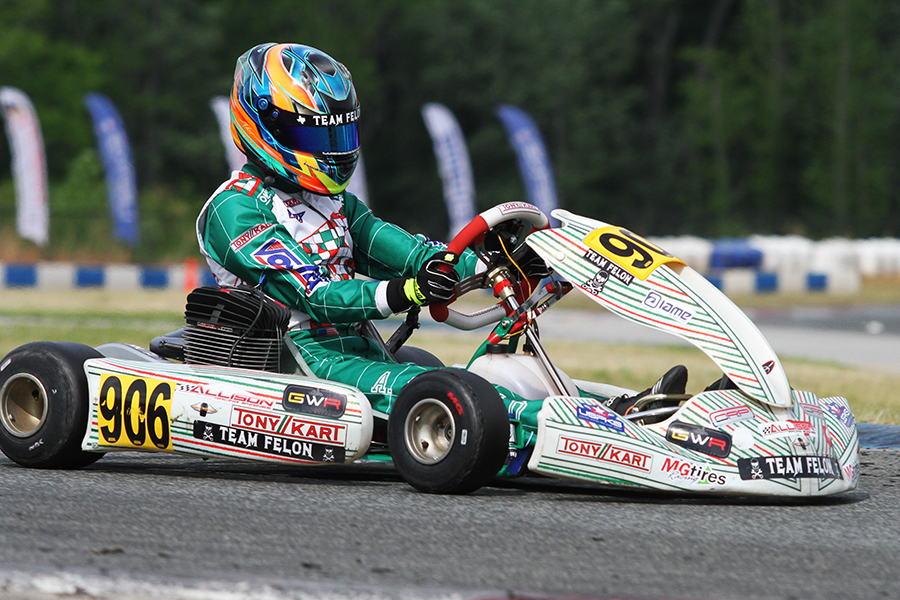 The fireworks began early in the Mike Doty Racing KA100 Senior class with the first lap of the first Prefinal. Top qualifier Tyler Wettengel (SCR / Redspeed) was involved in an opening lap incident that took him out of the race. With Wettengel out, Saturday winner Jeremy Fletcher (GWR / Tony Kart) won the race with Pauly Massimino (RPM / Tony Kart) scoring the win in the other Prefinal. Wettengel was able to come from 25th on the grid to finish third in the 10-lap Last Chance Qualifier to make the main event. He passed another 24 karts in the Final to end up 19th at his home track. Up front, Fletcher ran into trouble early and was shuffled back, eventually retired early with a flat tire. Four drivers stood out of the five-driver lead pack with Massimino, John Burke (Supertune / Tony Kart), Round Two winner Alex Stanfield (GWR / Tony Kart) and Aiden Levy (Harvick / FA Kart) each taking a turn at the point while Diego Ramos (REM / Kosmic) trailed the group waiting for his opportunity. The major moment came on the final circuit with Burke leading ahead of Massimino. Burke ran a defensive line into turn one, with Massimino getting a major run on the exit. As they jumped the curb in turn two heading up the hill for turn three, Burke looked over his left shoulder while Massimino drove up alongside his right side. As they approached turn three, the two made contact and went spinning off the track. This allowed Stanfield to grab the lead as he held on through the final corners and the run to the checkered flag for his second victory of the season. Ramos took advantage to come across the second spot ahead of Levy with Dalton Hanes (Top Kart) crossing the line in fourth. Hanes suffered a pushback bumper penalty, which promoted Adrian Cruz (CDD / Exprit) to fourth with Hanes ending up fifth, improving 14 spots. 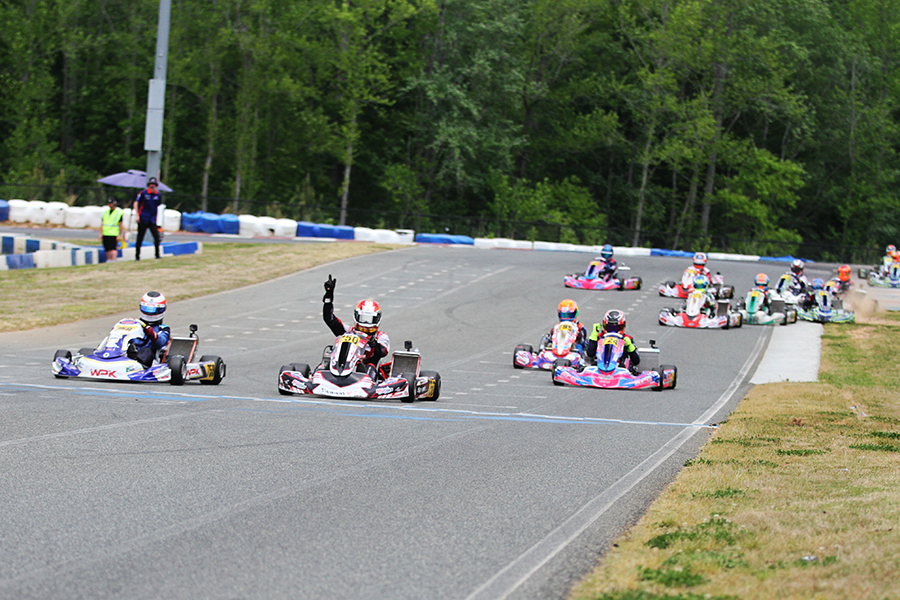 The racing in the Rolison Performance Group X30 Junior category was among the best all weekend with several drivers in contention. Sebastian Wheldon (JC / LN Racing Kart) earned his first pole position on Friday during qualifying but found himself back in sixth after the Prefinal as Max Garcia (MPG / WPK) held off Round Two winner Ayden Ingratta (SCR / Redspeed) for the win. The lead group started out with five drivers and eventually became the top-10 in the final few laps. In total, there were eight different lead changes over the 22 laps including Garcia, Ingratta, and two-time winner Caleb Gafrarar (RPG / Kosmic). With two laps to go, contact between Gafrarar and Jakub Kolar (Piquet / FA Kart) helped to shuffle up the field even more. Ingratta took the lead at the white flag and from there, was able to hold off challenges to come across the line with his second victory, by a mere 41 thousandths ahead of Garcia. Ernesto Rivera (RPG / Kosmic) grabbed his first USPKS podium in third. Last year’s Mini Swift champion Enzo Vidmontiene (Benik / Kosmic) crossed the line fourth but a pushback bumper penalty dropped him out of the top-10. Parker DeLong (RPM / Tony Kart) was fifth, however, was removed following tech. This all promoted Jorge Ortiz (Supertune / Tony Kart) up to fourth with Wheldon classified fifth. 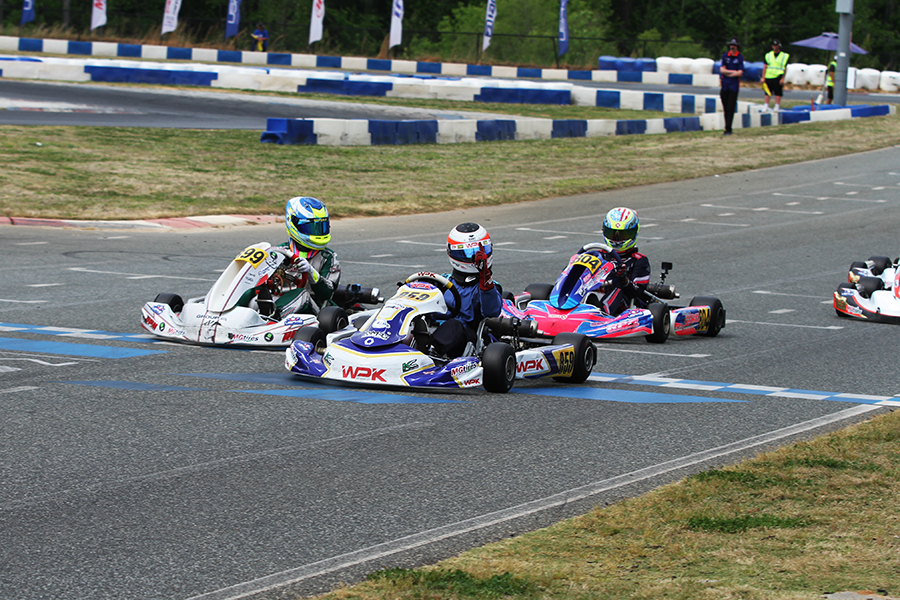 Both Junior categories were exciting on the day, including the Timmy Tech KA100 Junior division. Mooresville driver Adam Brickley (TKG / Kart Republic) set fast time in qualifying and came through for the win in the opening Prefinal while Max Taylor (MDR / LN Racing Kart) took the win in Prefinal EVEN. Both Brickley and Taylor led early before Caleb Gafrarar (RPG / Kosmic), Round One winner Max Garcia (MPG / WPK) and Parker DeLong (RPM / Tony Kart) were the drivers that led the most with a host of drivers in the mix. Garcia, who stared eighth, appeared to be the driver to beat throughout the race as he continued to return to the point after getting passed. Garcia held off the pack through the final few corners to earn his second victory of the season. DeLong was only 64 thousandths off in second with Gafrarar back up to third late after getting shuffled back. Cooper Shipman (IRM / Tony Kart) was fourth with Saturday winner Helio Meza (IRM / Tony Kart) fifth. 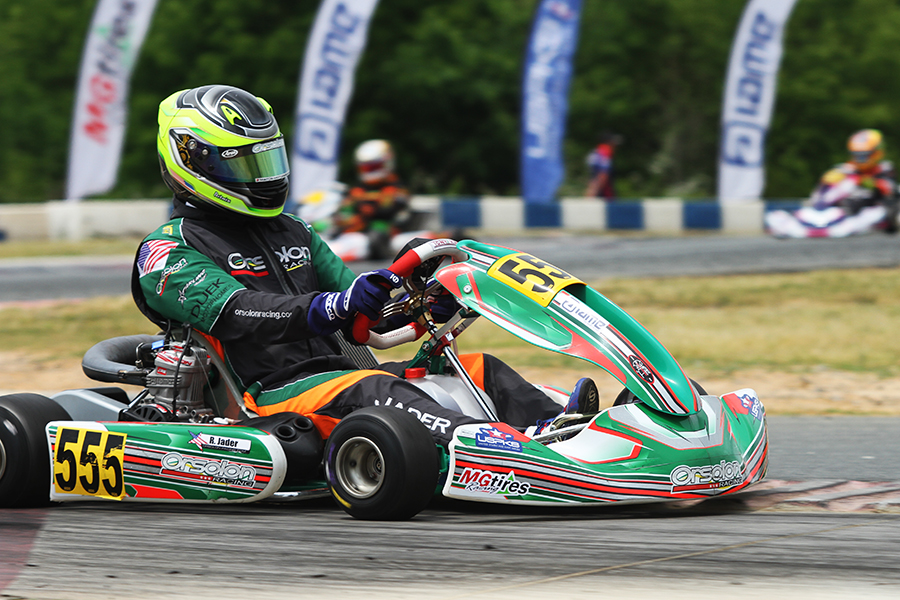 The win streak for Danillo Ramalho (REM / Kosmic) ended at three with Sunday’s action in the Speed Concepts Racing X30 Masters class. Two-time defending champion Scott Kopp (FMS / Exprit) set the fast time in qualifying on Friday. In the Prefinal, Kopp was shuffled back to fourth with Renato Jader David (Orsolon / Tony Kart) taking the win. During the race, three-time winner Ramalho retired with electrical issues, putting him 17th on the grid for the Final. RJD was challenged at first by Mario Barrios (RPG / Kosmic) who led for four laps. After Renato took back the lead, Scott Roberts (SCR / Redspeed) grabbed the top spot. Coming to the two laps to go signal, RJD made his move on Roberts for the lead through the hairpin and double right-hand corners. At the same time, Ramalho had worked through the field with fast laps of the race and closed up on the top two. Ramalho tried to take advantage of Roberts slower pace out of the double rights and pulled up alongside him heading to the kink before the last corner. The two made contact and went spinning off the track. Ramalho went on to finish ninth while Roberts was classified 12th. This allowed Renato to drove away to his first victory of the season with Barrios ending up in the second spot. Kopp landed on the podium in third with Martin Stone (REM / Kosmic) fourth and Laurentiu Mardan (Tecno Kart USA) the hard charger of the race, up 13 spots to fifth. 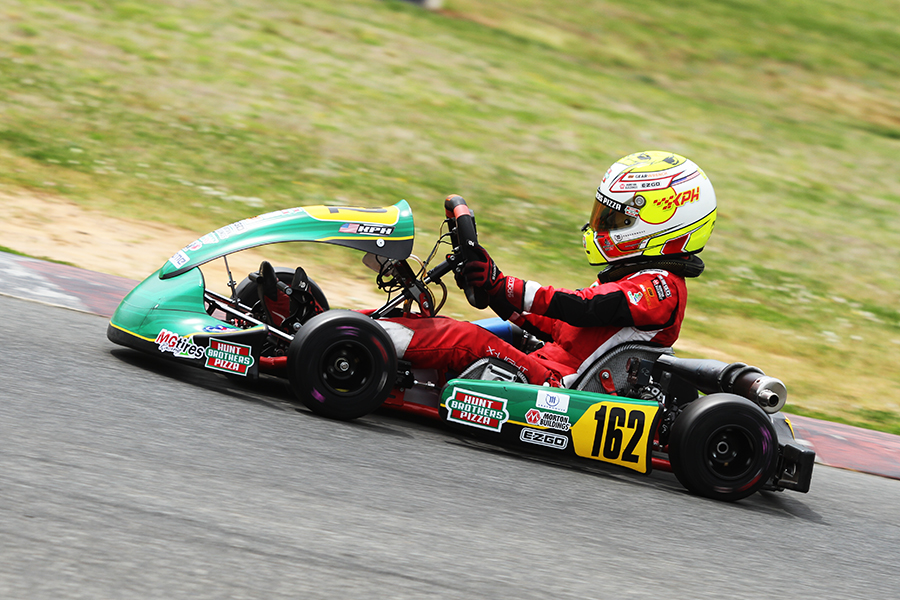 The DNJ International Services Mini Swift came down to a photo finish. It included a trio of drivers – Prefinal winners Jack Iliffe (Parolin USA), Kai Johnson (Benik) and top qualifier Keelan Harvick (Parolin). The three were able to get away from the rest of the field with Iliffe at the point. He led for the first 19 lap until the final circuit. Harvick fought Iliffe for the lead through the double right hand corners. This gave Johnson the opportunity to go inside from third and into the lead down to the final corner. He ran a narrow line and a little contact from behind from Iliffe slowed them a bit on the exit. This gave Harvick a boost out of the final corner, able to drive to the inside of both and win at the line by five thousandths over Johnson. Iliffe ended up third with Carson Weinberg (SCR / CRG) winning the fight for fourth ahead of Max Cristea (PSL / Birel ART) – up 12 spots in the 20-lap race. 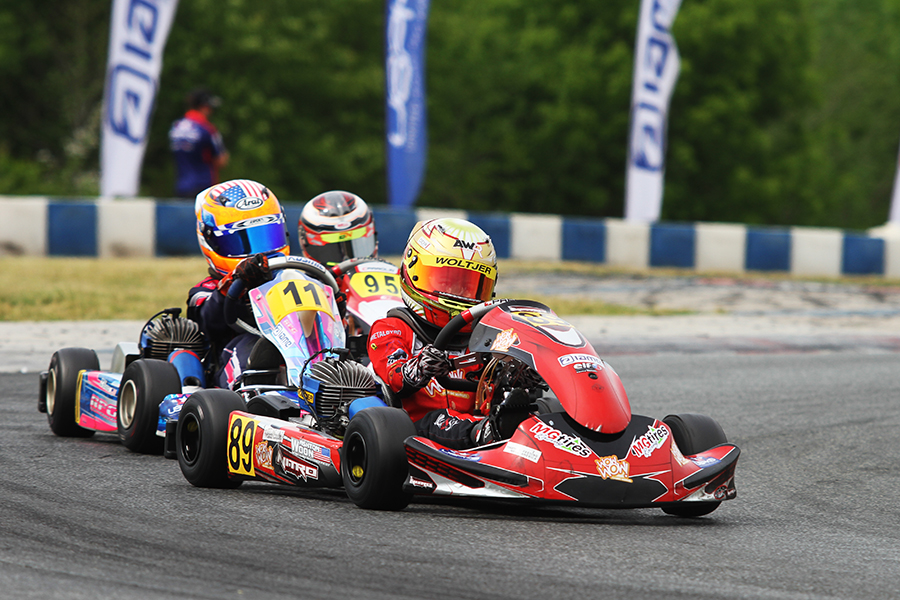 It was also three drivers fighting for the victory in the Team Ferris Racing Micro Swift class. Saturday victor Ashton Woon (Team Nitro / Parolin) climbed up 15 spots in the Prefinal for the win ahead of Jackson Gibson (RPG / Kosmic) and Round Two winner Rocco Simone (Parolin). They drove away from the rest of the field to decide the main event. Gibson led early with Woon leading the majority of the race. Simone put himself into the top challenger position late in the race, however, was unable to stick a move for the lead. At the line, Woon took the victory by 64 thousandths ahead of Simone. Gibson trailed in third for a second podium of the weekend. Cameron Marsha (Nitro Kart) and Parker Ives (Nitro Kart) completed the top-five.

The second half of the 2022 United States Pro Kart Series is scheduled to begin in two months at the Briggs & Stratton Motorplex at Road America over the July 7-10 weekend for the Badger State Grand Prix in Elkhart Lake, Wisconsin.