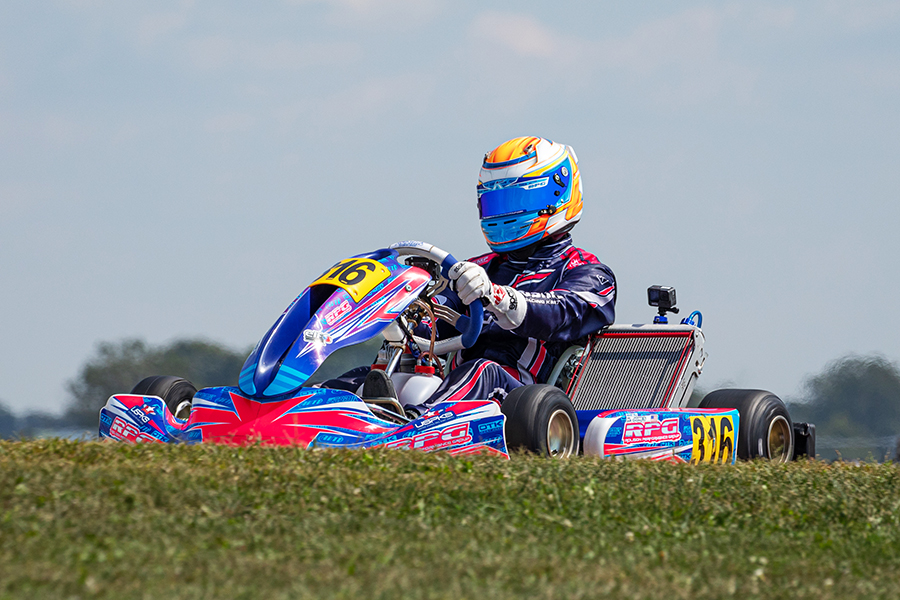 The X30 Senior category has seen very few winners on the season across the country at the national level. Considering the Superkarts! USA Pro Tour and the United States Pro Kart Series, SKUSA SuperNationals 24 winner Ryan Norberg won 11 of the 12 main events heading into the USPKS finale. The Heartland Grand Prix was contested over the September 16-18 weekend at the New Castle Motorsports Park with a solid 27-driver field competing in the X30 Pro category. Leading the way at the end of each day as the checkered flag waved was Rolison Performance Group driver Hayden Jones, earning his first two victories of the season.

Jones managed to qualify second to open the Saturday round of racing, off by just over a tenth to Norberg’s 1:04.364 lap time. They along with fellow Rolison Performance Group teammate Nate Cicero broke away from the field in the Prefinal with Jones coming out on top after the 12-lap battle. At the start of the 18-lap Final, Jones found himself shuffled down to third but quickly passed Norberg and Cicero for the top spot. Jones led most of the race, with both Norberg and Cicero taking a turn at the point from lap 12 to lap 15. That’s when Jones secured the top spot and was able to get away for his first victory of the season.

The eighth and final round of the 2022 USPKS season began similar to the previous day’s results. Jones ended the qualifying session second in the timed session, this time with Cicero setting the fast lap of 1:04.330. The start to the Prefinal was tough for Jones on the outside of the front row. After dropping off course, he was able to rejoin in the fourth position. Heavy fighting up front allowed Jones to go from fourth to first on lap two, and from there lead the remainder of the race for the win. The start of the Final was similar, with the field going on the attack early. Jones found himself shuffled down to ninth by the end of lap three. With consistent speed, Jones began picking off drivers one by one. Once toward the front, leader Nate Cicero lost his rear bumper and was meatball flagged off the track. Jones had just worked past Massimino for second and took over the lead when Cicero pulled off track. From there, Jones was able to drive away to a 1.8-second margin of victory to sweep the weekend. His performances helped him earn the $5,000 payday on the weekend, along with giving Rolison Performance Group all eight victories of 2022 in the X30 Pro category, making it 12 straight dating back to the 2021 Road America event.

Jones was slated to compete at this weekend’s IAME Warrior Final event in the X30 Senior category as the lone driver from the United States at the event in Le Mans, France. Passport issues along with injury from the IAME USA Grand National Championship and coming down with the flu, Jones elected to forgo the trip across the pond and focus on his schoolwork at Virginia Tech. Next on the docket will be the Superkarts! USA SuperNationals 25 for the eKartingNews.com TaG Driver Rankings presented by Skip Barber Racing School #2 driver.