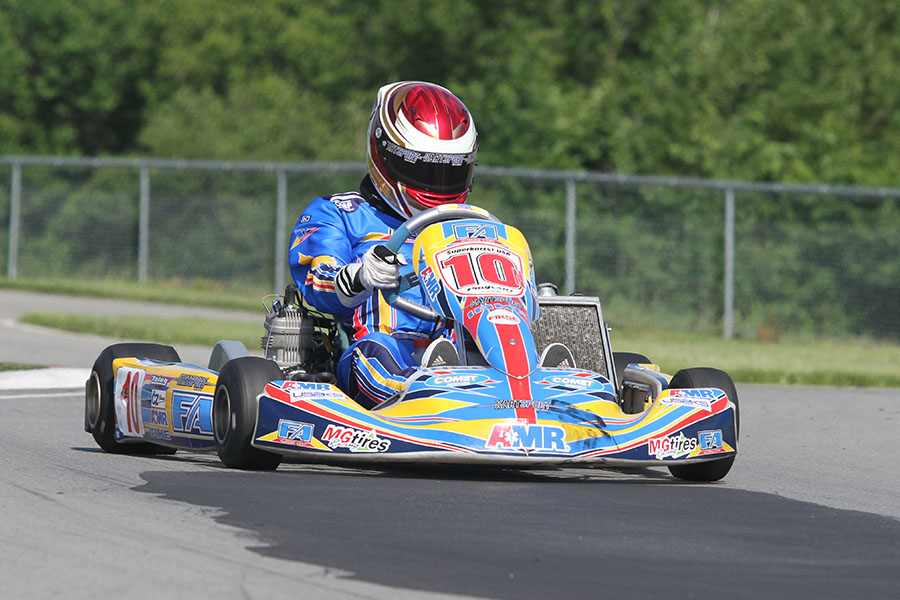 The second event of the 2017 United States Pro Kart Series contested the first of two racing days on Saturday, with Round Three of the eight round championship program completed at the Pittsburgh International Race Complex. The weather was perfect all day long in Wampum, Pennsylvania as the near 100 entries in seven categories completed four rounds of official on-track sessions. The qualifying, two heats and main event format made for a busy day of action, delayed for some time following an incident that sent one driver to the medical center with a broken collar bone. Aside from that incident, the rest of the day saw clean and competitive racing in all the divisions.

Once again, the IAME KA100 category is the largest on the weekend with 23 drivers on hand – including a mixture of national and regional talent. Franklin Motorsports / Merlin driver Josh Hotz was the driver to beat early on, setting fast time in qualifying and winning the opening heat race. Brandon Jarsocrak (KSNA / Praga) picked up the pace in Heat #2, scoring the race win. From the pole position, Jarsocrak never looked back, leading all 16 laps of the main event for his first victory in the category. The win looked to be easy because of the heavy battle for the second position. At the checkered, championship leader Alex Bertagnoli (Franklin / Merlin) secured the position ahead of Mike McAndrews (Fullerton). Hotz ended up fourth with Nick Landi (FA Kart) besting TJ Koyen (Innovative / Exprit) for fifth. 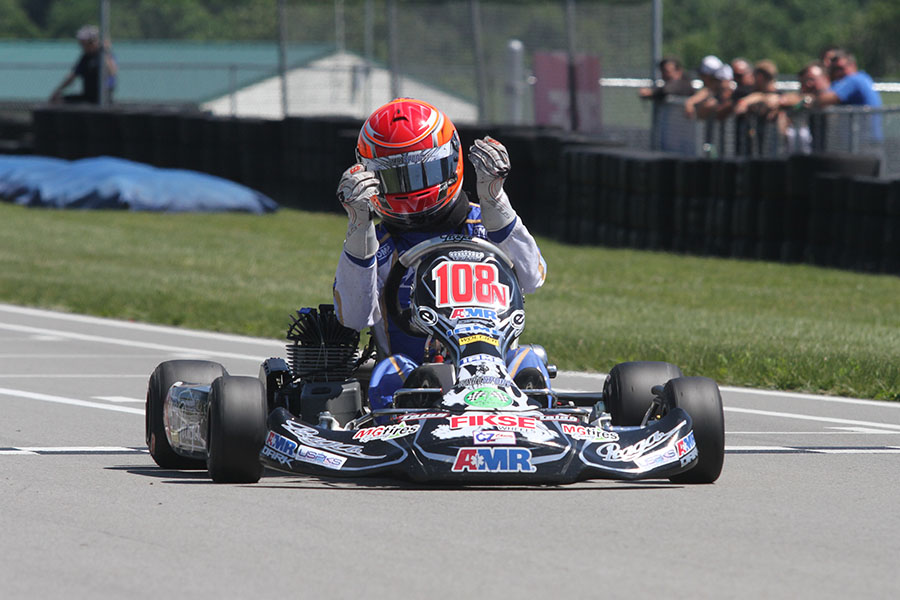 It appeared that Brandon Jarsocrak was putting in a two-win performance on the day. The KSNA / Praga pilot set the pace throughout the day, leading qualifying while winning both heat races. Behind him, KartSport North America teammate Jacob Donald (FA Kart) was waiting in the wings, waiting to strike. At the drop of the green flag for the main event was all Donald needed, getting the jump on Jarsocrak. The championship leader fell down to fourth as Donald established a lead at the front. Donald ran the fastest laps of the race, driving wire-to-wire for the victory. Alex Bertagnoli (Franklin / Merlin) was second, until he was removed from the results following tech. That promoted Jarsocrak to runner-up and Cal ‘Cowboy’ Stewart (Franklin / Merlin) to the third step on the podium. Senior rookie Stephen Dial (Express / Merlin) locked in his best result with a fourth, beating former series winner Armin Cavcusic (Franklin / FA Kart).

Tyler Gonzalez has put himself among the top Junior drivers in the country. The SuperNationals winner added another notch on his victory belt by sweeping the IAME Junior division today. It was not has easy as it appeared to be early on in the day, setting fast time in qualifying before dominating the heat races. Two drivers stepped up to the challenge in the main event – Maks Kowalski (Franklin / Merlin) and Pitt star Tahlon Yockel (Tony Kart). Kowalski was the aggressor, going back and forth for the lead with Gonzalez and Yockel was waiting in the wings for something to happen. On the final lap, Yockel was second, slipping past Gonzalez for the lead. Kowalski followed him through and then attempted a pass of his own to retake the lead. They pushed wide, and Gonzalez took full advantage, reassuming the lead. At the line, Gonzalez took the victory ahead of Kowalski and Yockel. Ocala Gran Prix / Tony Kart driver Zachary Hollingshead drove up to fourth with championship leader Austin Schaff (Merlin) in fifth. 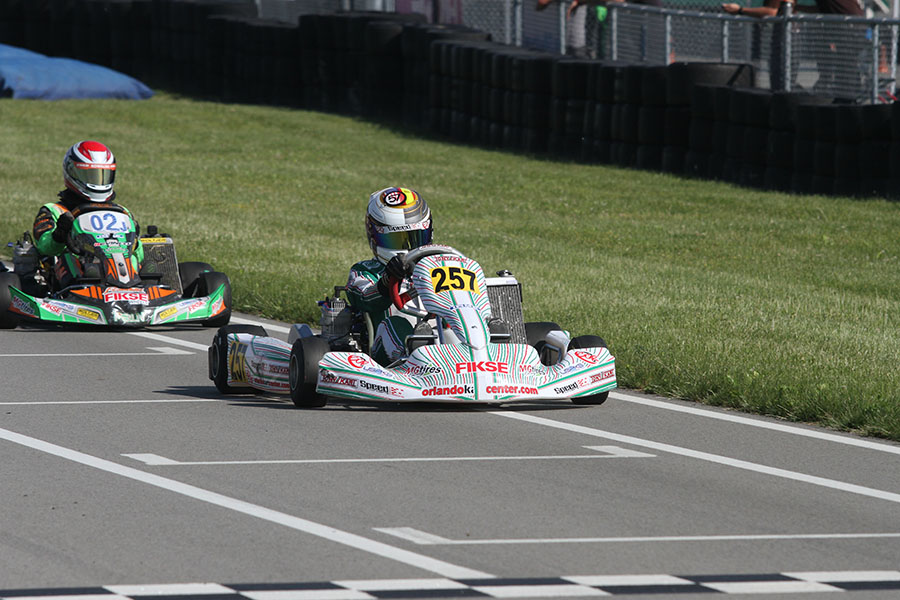 The Yamaha Junior victory was decided before the green flag waved. As they field made their way around to come to the green flag, officials noticed Colin Neal (MDD / Tony Kart) was not wearing a neck collar. The double heat race winner was shown the meatball flag as they completed lap one, ending his race. That handing the lead over to top qualifier James Lynch (Tony Kart), as he drove away to a seven-second margin of victory. Ben Lyda (Merlin) placed second with Matthew Mockabee (Tony Kart) in third.

The IAME Mini Swift category was cut just short of the full distance in the main event. On the final circuit, Isaac Beekman was involved in a wreck and flipped over hard. Thankfully, the rest of the field avoided him, however, the officials threw the red flag to get the medical staff there as quickly as possible. The day to that point belonged to Connor Zilisch (Energy), who set fast time in qualifying and won both heat races. He was joined by Brent Crews (Nitro Kart), Jeremy Fletcher (Tony Kart) and Annie Rhule (Energy). With the red flag being displayed, the final results were reverted back to lap 13, giving Crews the victory. Zilisch was second with Fletcher third, Rhule fourth and Nicholas Terlecki (Merlin) falling back to fifth after leading early in the race. 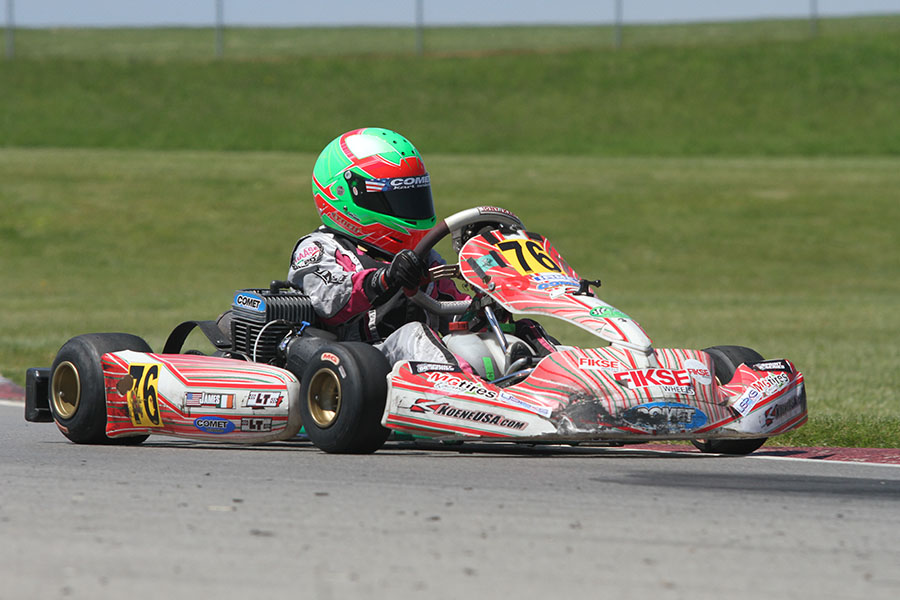 The IAME Micro Swift division went down to the wire. Sebastian Ng (Nitro Kart) set the pace for much of the day, winning both heat races. Leading the first six laps of the main event, he slipped back to third allowing Mateo Rubio-Luengo to lead. Ng worked his way back up to second, reeling in Mateo and waiting for the final circuit. Christian Miles (Formula K) and Caleb Gafrarar (Parolin) were right there, as all four mixed it up on the final circuit. They raced to the line with Ng able to come away with the victory by 46 thousandths of a second. Miles finished third with Gafrarar in fourth, posting fast lap of the race. Top qualifier Sofia d’Arrigo (Nitro Kart) placed fifth.

Zilisch (Energy) was able to earn victory on the day, taking home the Yamaha Cadet main event win. He along with double heat race winner Mateo Rubio-Luengo (Benik) and Annie Rhule (Energy) drove away from the field. Zilisch, the top qualifier, led the majority of the race. Mateo pulled the trigger prior to the white flag, taking the lead. He drove a defensive line into turn one, allowing Zilisch to pull the over-under on the exit. Rhule gave him a push to help move him into the lead, dropping Mateo back to third. He struck back quickly, trying to work past Rhule in turn four. He climbed her left rear tire, slowing them both down just enough for Zilisch to go unchallenged to the checkered flag for the victory. Rhule finished second with Mateo in third. Sebastian Ng (Nitro) was fourth with Nico Montileone (Top Kart) in fifth. 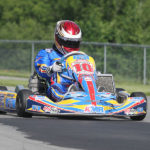