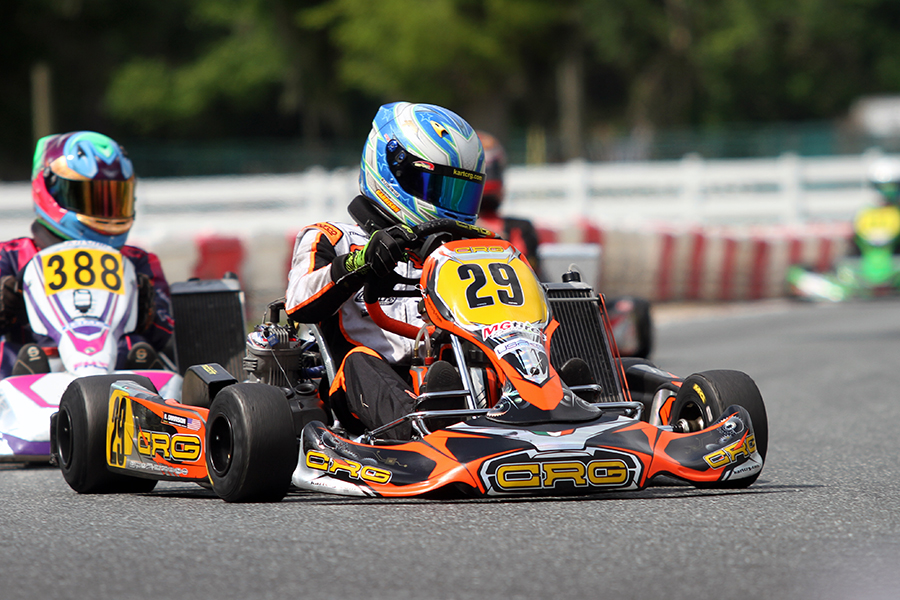 The 2019 United States Pro Kart Series Southern Grand Prix completed the opening round of the championship chase on Saturday. Warm weather greeted the 165 entries on the day until a quick storm blew through Ocala Gran Prix facility with two main events remaining, shaking up those races after the sun came back to end the day. Not many races were decided at the end, with the seven winners securing their victories well before the checkered flags waved. 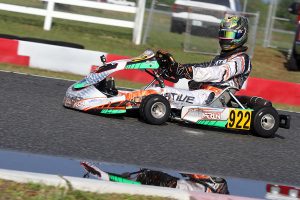 The X30 Pro division reached the 30-driver mark once again, with a stout field battling around the bull-ring that is Ocala. Local driver Colin Warren (TB Kart) set the bar with fast time in qualifying and a solid Prefinal win. Last year’s winner Austin Garrison (CRG Nordam) – driving for CRG Nordam – picked up the pace in the 30-lap Final, grabbing the lead on lap two from Warren. As the race moved on, Warren continued to drift back with Jake Venberg (Franklin / Kosmic) and then the real ‘Jamaican Sensation’ Collin Daley (DRT / DR Kart) working past the Florida driver. The top three remained static throughout much of the race, matching each other’s pace. Garrison claimed his first victory with CRG holding off Venberg and Daley. Zach Hollingshead (TB Kart) crossed the line in fourth, but was penalized two spots for push back bumper, moving Warren to fourth and Tyler Ferris (TFR / Kart Republic) completing the fast time.

The KA100 Senior division was a toss up throughout the day with three different drivers finishing the session in the P1 position. Julia Boos (Kosmic) set fast time in qualifying while Colton Ramsey (Innovative / Exprit) won the Prefinal, only to have it taken away for a pushback bumper to give Matthew Mockabee (Comet / Tony Kart) the win. The rain hit before their main event, and due to the storm, was put out on the wet track with the sun out. Josh Hotz (Franklin / Merlin) dominated the 26-lap Final, driving away to a 12-second advantage. The victory was a first for the 2018 ‘Throwdown’ king in USPKS competition. Mockabee and Ramsey struggled with the wet track, dropping out of the top-five. Blake Hunt (DRT / DR Kart) drove up to the second spot, but a pushback bumper dropped him to fourth. That promoted Jack Dorsey (Tony Kart) to second with Emory Lyda (Nitro Kart) to third. Arie Venberg (Franklin / Kosmic) completed the top-five. 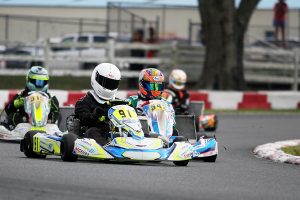 It was the same in the X30 Junior division with a no clear driver setting the tone until the main event. Connor Zilisch (LAK / Tony Kart) came through as the quick driver in the Final. Starting fifth, Zilisch was able to work past Prefinal winner John Burke (Supertune / Tony Kart) for the lead, driving away for the victory. It was the first Junior victory in USPKS competition for Zilisch. Burke held off Brent Crews (KSNA / Kart Republic) for the runner-up spot with Kyffin Simpson (SCR / Tony Kart) in fourth and Paul Bocuse (SCR / Tony Kart) in fifth.

Rain hit the KA100 Junior during the main event, and was red flagged after seven laps for the storm that hit the area. After the KA100 Senior was completed, the Junior class jumped back on track to continue their main event with drivers putting on dry tires after the track dried. Prefinal winner Dylan Christie (MDR / Kosmic) led the field to the green flag but was shuffled back. This allowed Jeremy Fletcher (Zanella / Tony Kart) to lead the field. He was trailed by Brent Crews (KSNA / Kart Republic) and Connor Zilisch (LAK / Tony Kart) throughout the race, with neither able to close up the gap. Fletcher grabbed his first Junior victory of his career, with Crews crossing the line second, only to be given a two-position penalty for avoidable contact. That promoted Zilisch to the second spot with Nikita Johnson (Energy) completing the podium in third. Crews was classified fourth with Westin Workman (CompKart) in fifth. 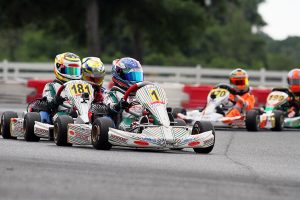 It was a two driver battle in the X30 Masters division with series winner Scott Roberts (SCR / Tony Kart) and newcomer David Galowina (CompKart). Galowina set fast time in qualifying with Roberts getting the edge in the Prefinal. The two broke away from the field in the Final, with Galowina holding the edge at the checkered flag, securing his first USPKS victory in his Masters debut. Roberts finished second with Danny Robertson (Tony Kart) beating out Scott Kopp (Innovative / Exprit) for the third step of the podium. New Castle 2018 winner Darin Marcus (Fullerton) completed the top five.

Defending Mini Swift champion Kai Sorensen (Tony Kart) was the lone driver to complete a sweep on the day. Sorensen set fast time in qualifying before edging out teammate Anderson Leonard (Tony Kart) for the Prefinal win. The two set the pace early in the Final with Sorensen able to break away in the second half, cruising to the victory. Michael Costello (Benik) closed up late on the lead group, knifing his way up to the second spot with Leonard ending up third. Christian Miles (Kart Republic) overcame a flat tire in qualifying advance his way up to fourth at the checkered flag with Miguel Costa (Parolin) in fifth. 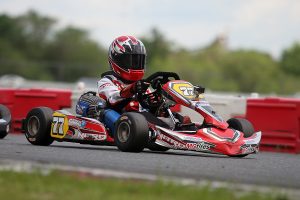 Spencer Conrad (Nitro Kart) earned his first USPKS victory in the Micro Swift division. Conrad set fast time in the qualifying session, but fell back to fourth in the Prefinal with Aryton Grim (Nitro Kart) earning the win. Conrad advanced up to the point in the Final, and was able to get away to the victory by over four seconds. Karsyn Walters (Tony Kart) won the battle for second over Grim with Carson Weinberg (Nitro Kart) in fourth. Kai Johnson completed the top-five. 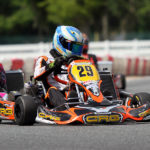