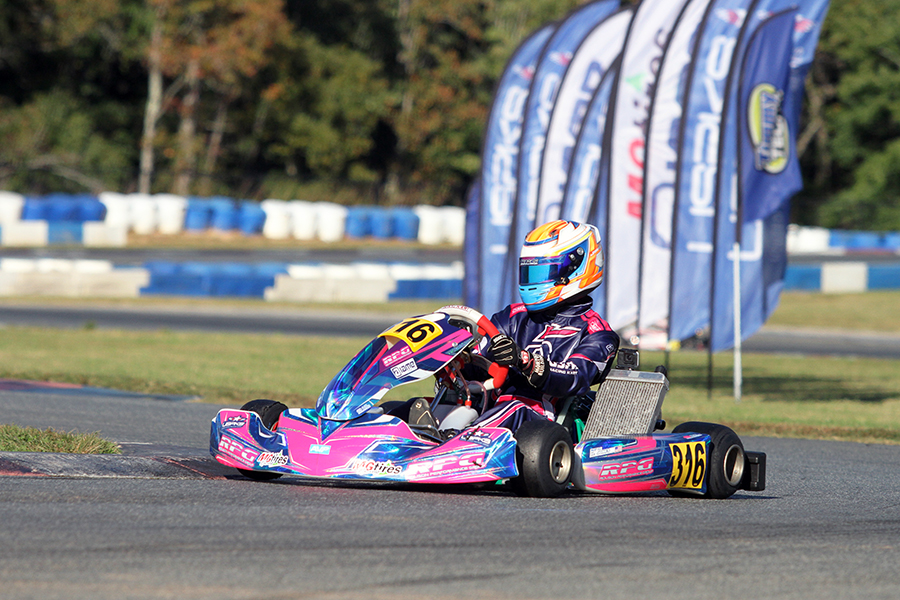 The 2021 finale for the United States Pro Kart Series completed the opening day of action for the Carolina Grand Prix at the GoPro Motorplex on Saturday. The third largest event in the nine-year history converged on the Mooresville, North Carolina facility for Round Seven and Eight on the weekend. The first day of racing Saturday featured the seven IAME categories, with some exciting moments throughout the day. It included first time winners in the two Senior headline categories as Hayden Jones stamped his Rolison Performance Group debut with a victory in X30 Pro while Pauly Massimino added to the GoPro drivers defending the home turf with victory in KA100 Senior.

The Franklin Motorsports X30 Pro division began with Pauly Massimino (RPM / Kosmic) setting fast time in qualifying with a 47.407-second lap, and only 86 thousandths separating the top-five including Hannah Greenemeier (RPG /Kosmic), Hayden Jones (RPG / Kosmic), Senior rookie Jack Jeffers (SCR / Redspeed) and Ryan Norberg (RPG / Kosmic). It was Norberg that took the checkered flag in the Prefinal, but a two-position penalty for pushback bumper dropped him to third and put Jones on the pole position for the Final. Jones led the field to the green flag and the opening circuit until Massimino and Connor Zilisch (Nitro / Tony Kart) each took a turn. Jones grabbed the spot back by lap seven and soon after, Zilisch retired after making contact with a barrier. That promoted four-time defending champion to second until both Norberg and Greenemeier worked past. Massimino and Nat Cicero (RPG / Kosmic) would also work past Jarsocrak until they ended their races with mechanical issues. Up front, Jones established a solid lead, and despite fast laps of the race by Norberg, was able to drive to his first series victory in the category. Greenemeier completed the RPG / Kosmic sweep of the podium with Jarsocrak able to hold on to fourth ahead of Parolin USA driver Alessandro de Tullio. The fifth spot changed after penalties with Alessandro earning a four position penalty for avoidable contact, moving Canadian Thomas Nepveu (TKG / Kart Republic) into fifth. 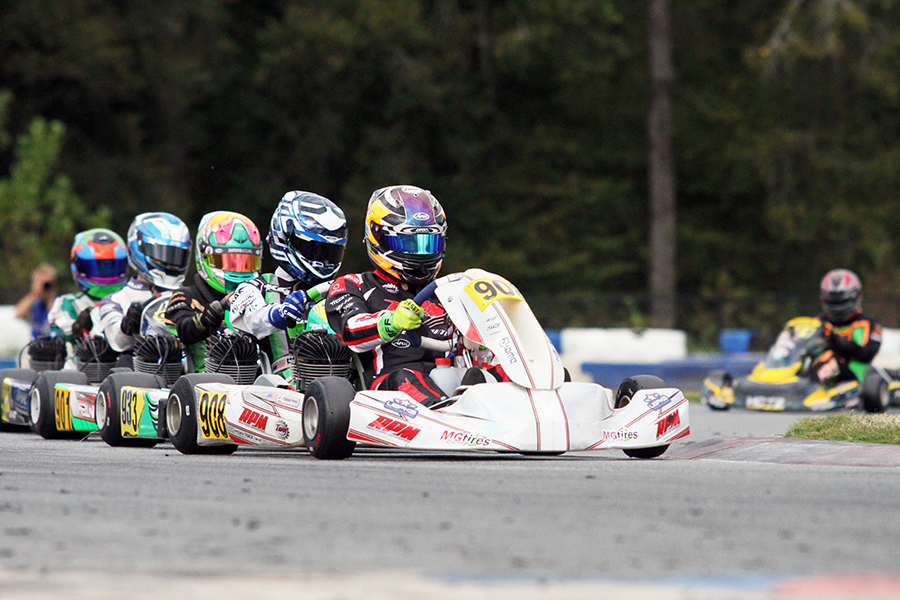 Drama unfolded early in the KA100 Senior class presented by Mike Doty Racing with championship leader Connor Zilisch (Nitro / Tony Kart) retiring after two laps following contact in turn six. The category was broken up into two Prefinal races, with the top 20 in each moving to the Final and the rest having to qualify in a Last Chance Qualifier. That is where Zilisch would find himself after the Odd Prefinal, won by Pauly Massimino (RPM / Tony Kart). Prefinal Even was won by Tyler Wettengel (TKG / Kart Republic). Zilisch was able to win the LCQ, starting 41st in the Final. As they fought up during the 22-lap Final, Zilisch was up into the by the halfway point. Eventually, Massimino established himself as the leader with defending champion Brandon Lemke (FMS / Merlin) in the top challenger position. Lemke grabbed the lead coming to the white flag, but Massimino returned the favor on the final circuit. Lemke came under pressure, allowing Massimino to get away and drive to his first victory of the season in his first start in the class. Wettengel was able to work by Lemke for the second spot on the last lap, with Connor Ferris (TFR / Kart Republic) a close fourth and Aiden Levy (TF / Tony Kart) in fifth. Zilisch was able to get himself into the sixth spot in the final few laps, advancing 35 spots in the 22-lap race. 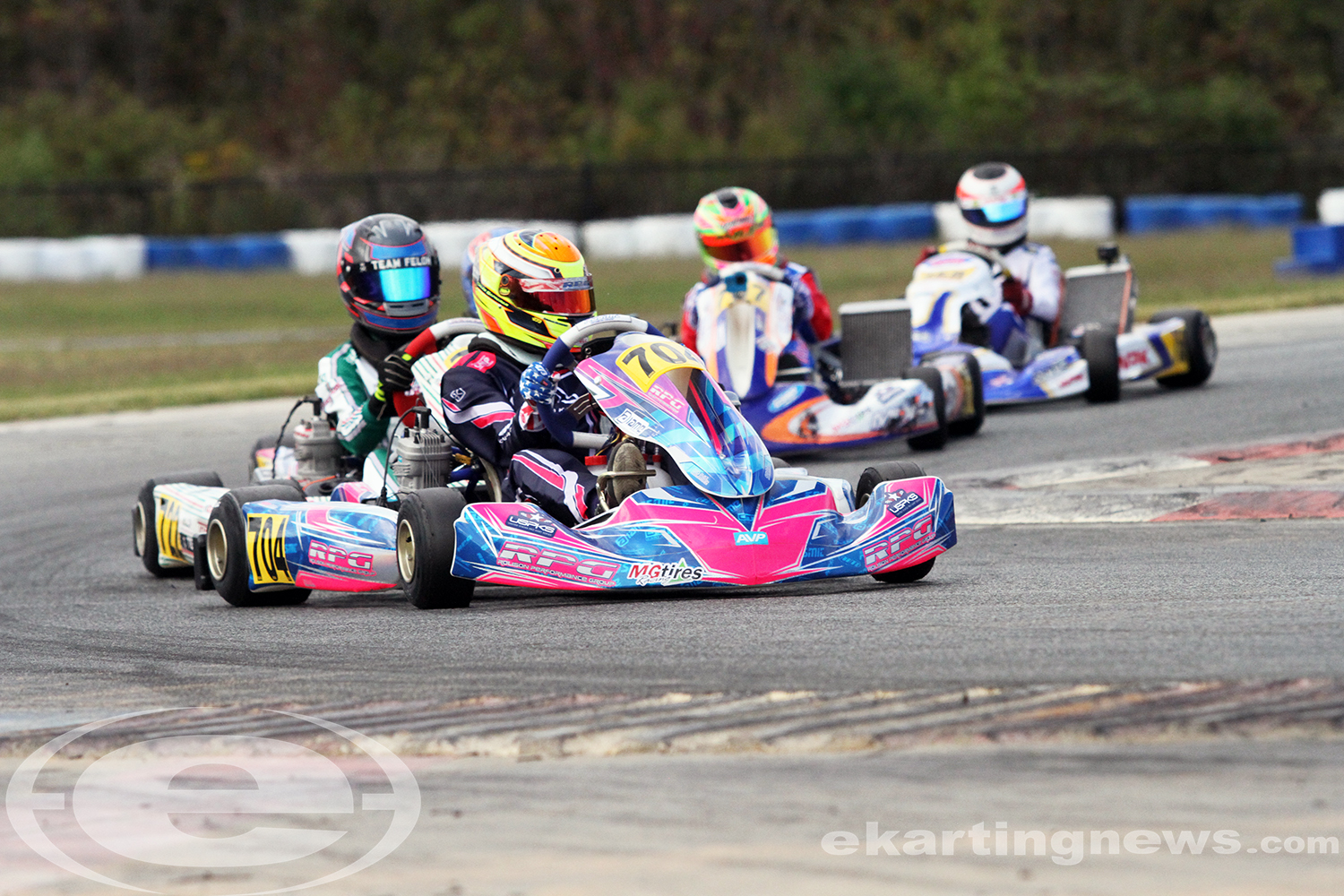 It was a sweep for Caleb Gafrarar in his Rolison Performance Group / Kosmic debut in X30 Junior presented by Rolison Performance Group. Gafrarar set fast time in qualifying and won the Prefinal to start the Final from the pole position. The 26-lap race was a battle the entire distance, including Gafrarar along with championship contenders Jeremy Fletcher (TF / Tony Kart), Christian Miles (MDR / Kosmic) and Ayden Ingratta (SCR / Redspeed). Fletcher and Gafrarar exchanged the lead numerous times until the final two laps when the North Carolina native Gafrarar was able to establish a gap over the rest of the field. Ingratta was on the charge after getting shuffled back early, sitting second on the white flag until he was challenge by Fletcher early in the lap. That gave Gafrarar enough breathing room to be able to drive away to his second victory on the season. Fletcher came away with the second spot as Ingratta crossed the line in third. He was penalized two positions for avoidable contact, moving him to fifth and advancing Max Garcia (MPG / Will Power Kart) to third with Miles finishing fourth. 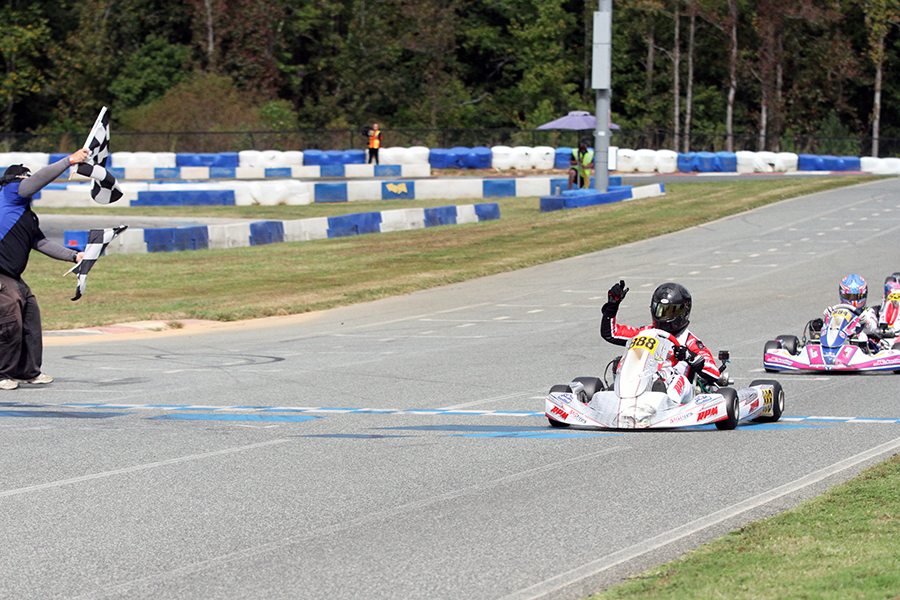 The KA100 Junior division presented by Timmy Tech welcomed a new winner. Championship leader Jeremy Fletcher (TF / Tony Kart) was in position to battle for the victory following a win in the Prefinal and leading early in the Final. Contact on lap 10 with Jake Walker (MDR / Kosmic) took them out of contention. That left a three driver battle for the victory including Sebastian Wheldon (JC / Kosmic), Austin Jurs (FMS / Redspeed) and Danny Dyszelski (RPM / Tony Kart). Dyszelski was able to grab the lead with a few laps remaining, and held on to the checkered flag for the victory, his first in the category. Wheldon settled for second with Jurs in third. Top qualifier Chase Hand (RPG / Kosmic) was shuffled back to 19th on the opening lap, and fought back to fourth with Helio Meza (IRM / Tony Kart) driving to fifth. 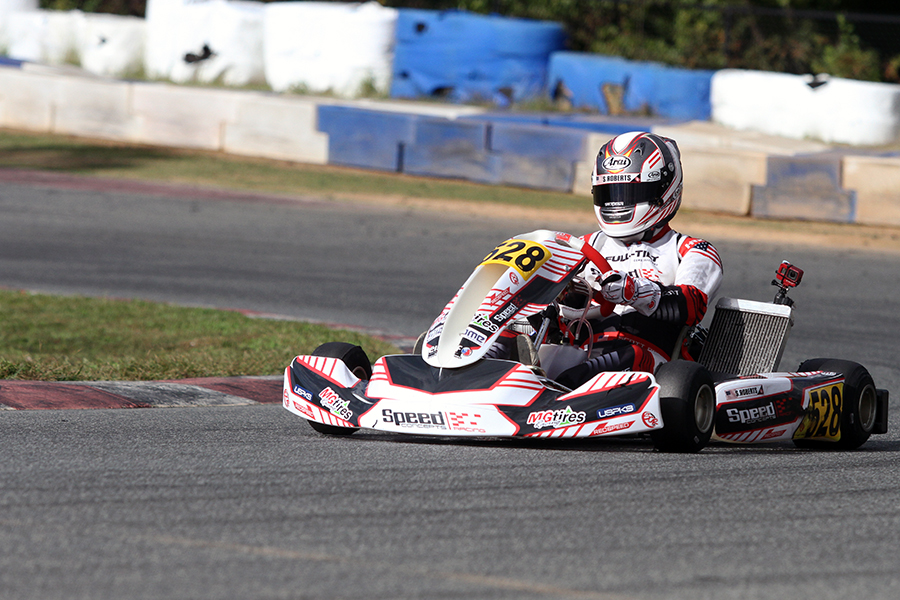 The Speed Concept Racing X30 Masters division was one of attrition. Scott Roberts (SCR / Redspeed) eventually put himself into the top spot after his engine cut out on the opening circuit, dropping him to fourth on the opening lap of the Final. By lap six, Roberts was into the top spot, while at the same time, top qualifier Alex Mueller (Tony Kart) was leading before Roberts made contact with a barrier to end his race. Roberts would be able to pull away as they continued to fight behind him, driving to victory by seven seconds. Championship contender Mario Barrios (RPG / Kosmic) drove to second with Edward Fortier (Tony Kart) winning the fight for third ahead of Frank Runco (Tony Kart). Fortier was penalized for avoidable contact and blocking, dropping him to ninth, moving Runco to third and point leader Scott Kopp (FMS / Exprit) in fourth. Robert Maier (RPG / Kosmic) ran up front early on but fell back to fifth. 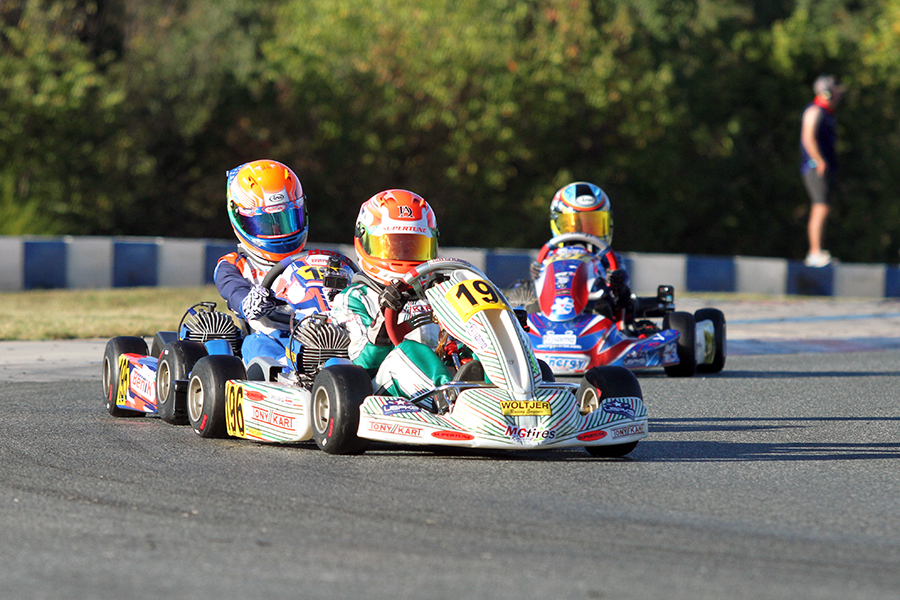 It was an amazing performance on the day in Mini Swift presented by Trinity Karting Group by Diego Ardilles (Supertune / Tony Kart). After qualifying 37th, Ardiles climbed through the Prefinal to end up 12th. From there, he moved forward in the Final, eventually taking over the lead on lap 15. He showed the way the rest of the distance, earning his second victory of the season. Championship leader Enzo Vidmontiene (Benik) drove to second with Prefinal winner Oliver Wheldon (JC / Kosmic) in third. Diego Guiot (Parolin USA) advanced four spots to fourth with Wesley Gundler (Nitro Kart) in fifth. 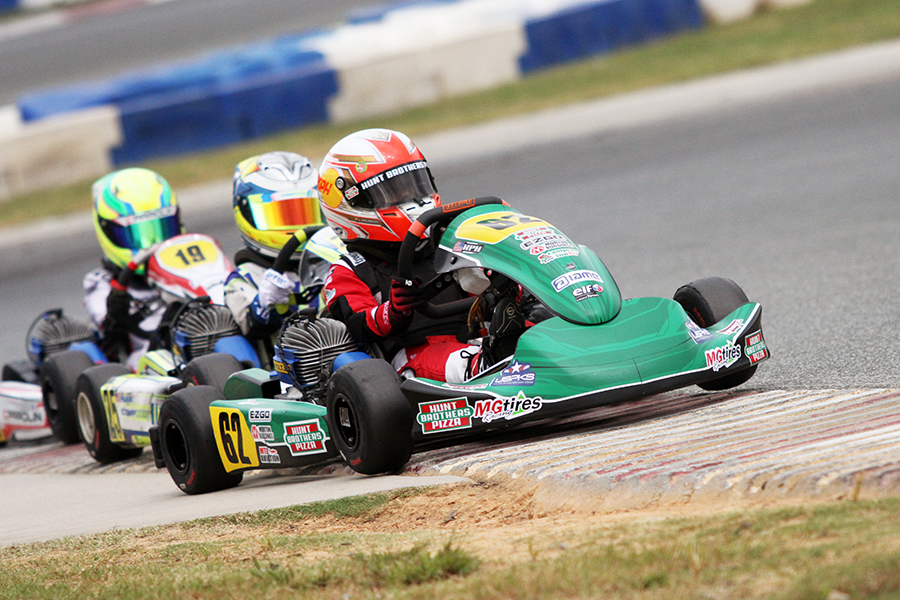 Keelan Harvick (Nitro Kart) made it a perfect day in the Micro Swift class presented by Team Ferris Racing. Harvick set fast time in qualifying and led all the laps of the Prefinal and Final. In the 20-lap main event, he held off Lucas Palacio (CompKart) in the closing laps for his third victory of the season, provisionally locking up the series championship. Ethan Tovo (Nitro Kart) advanced seven spots to third with Alessandro Truchot (Parolin USA) placing fourth. Gianmatteo Rousseau (Nitro Kart) completed the top-five.

The eighth and final round of competition is set for Sunday at the GoPro Motorplex facility for the United States Pro Kart Series. Following complete coverage on the EKN Live page and on EKN Social Media outlets.