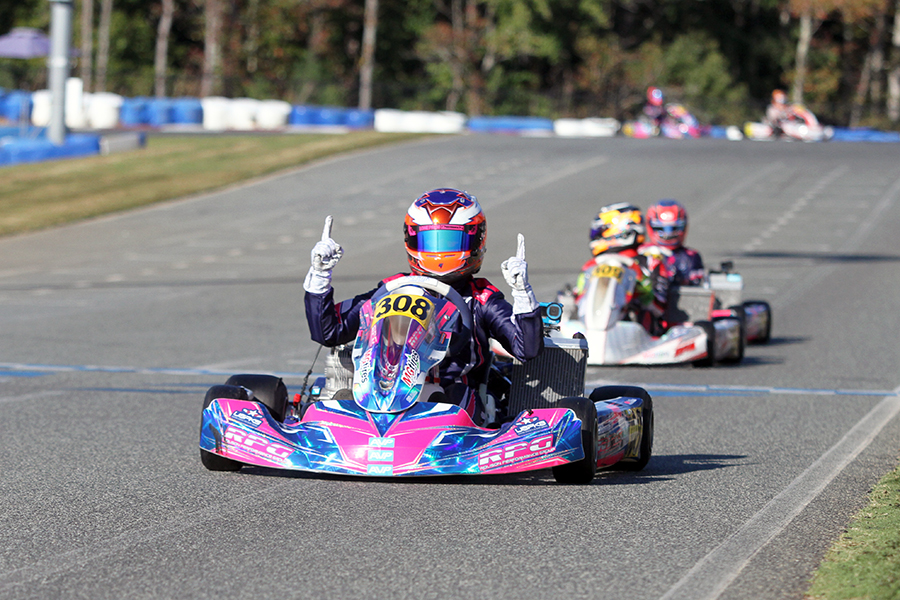 The 2021 United States Pro Kart Series completed the final day of competition on Sunday at the GoPro Motorplex. The action wrapped up the Carolina Grand Prix at the Mooresville, North Carolina facility with cooler weather but the bright sunshine provided an excellent backdrop for the eighth and final round of racing on the season. Four of the championships were locked up with the Round Seven results on Saturday, meaning that three titles were still to be decided based on the outcomes of Sunday’s action.

The Franklin Motorsports X30 Pro division welcomed its fifth different winner on the season. The day began with provisional champion Ryan Norberg (RPG / Kosmic) setting fast time in qualifying, clearing the field by two tenths with a 47.107-second lap. Teammate and Saturday winner Hayden Jones was able to come away with the win in the Prefinal to once again lead the field to the green flag in the Final. Jones was joined up front by SKUSA Pro Tour champion Hannah Greenemeier (RPG / Kosmic), Norberg and Pauly Massimino (RPM / Kosmic). Norberg controlled much of the race with Greenemeier in second and Jones in third. A broken chain on lap 17 put Jones on the sidelines, ending his hope for a double-win weekend. A few laps later, Greenemeier took over the lead from Norberg. She led the remainder of the race, earning her first series victory to close out the year. Norberg had to fight Massimino on the final circuit, with the North Carolina driver beating out the new champ for the runner-up spot. Alessandro de Tullio (Parolin USA) capped off a solid weekend, placing fourth ahead of Branyon Tiner, who put a third RPG / Kosmic ride inside the top-five. In sixth was IndyCar and Indy 500 champion Will Power (MPG / WPK), showing good pace throughout the weekend and avoiding incident on Sunday to produce a solid result. Zilisch was just ahead of him, but a mechanical issue dropped him to 13th in the final few laps. On the weekend money podium, Greenemeier took home the top prize of $5,000 with Norberg second at $2,500, while de Tullio earned $1,750 for his efforts. Norberg’s Sunday results helped to extend his championship advantage to 181 points as he scored his first USPKS title. Zilisch finished in second in the standings, while four-time defending series champ Brandon Jarsocrak (MDR / Kosmic) completed his run in third. Massimino and de Tullio capped off the championship podium. 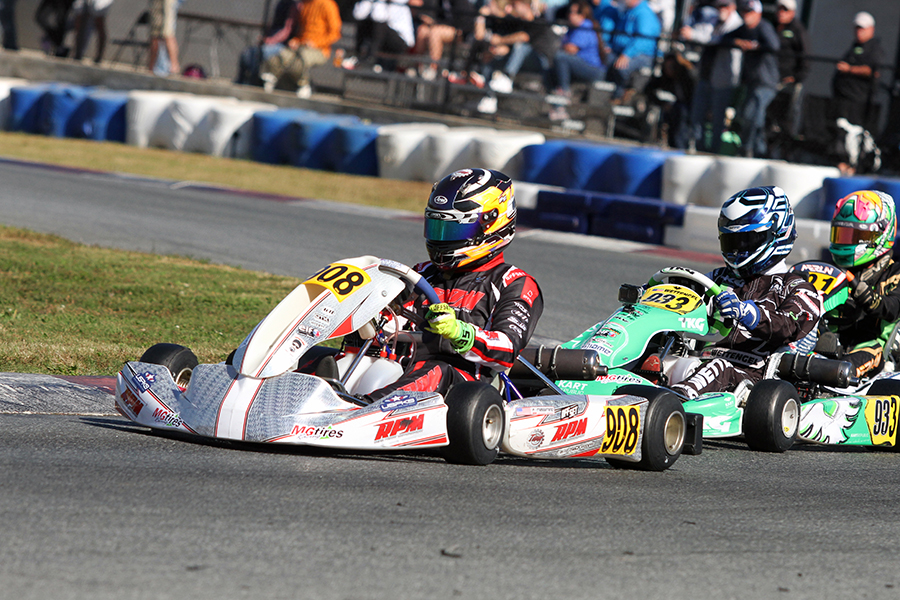 The championship in the Mike Doty Racing KA100 Senior division was decided on Saturday as well with Connor Zilisch (Nitro / Tony Kart) salvaging enough points after coming from the LCQ to claim the title in his rookie season. That left Sunday as a straight battle for the victory. Saturday winner Pauly Massimino (RPM / Kosmic) set the tone by clearing the 50-driver field by a solid four tenths in qualifying. He turned that pace into a Prefinal win in the ODD race, while 2020 champion Brandon Lemke (FMS / Merlin) took the EVEN win. They were joined at the front of the field in the Final by Tyler Wettengel (TKG / Kart Republic) who slotted into second with Massimino at the point. They would run the entire 22-lap distance like that, with no attempts to change the order. Massimino doubled up in the win column in his one-off in KA on the season. Zilisch was involved in an incident during his Prefinal, but was able to avoid the LCQ and started 33rd. He drove up to the fourth spot by the checkered flag, but was given a two-position penalty for starting infraction. That penalty promoted Aiden Levy (TF / Tony Kart) to fourth, and Connor Ferris (TFR / Kart Republic) into fifth. The final advantage in the standings for Zilisch was 56 over Lemke. Hayden Jones (RPG / Redspeed) placed third in the final standings. Levy advanced to fourth on the final weekend with AJ Myers (Magik Kart USA) classified fifth. 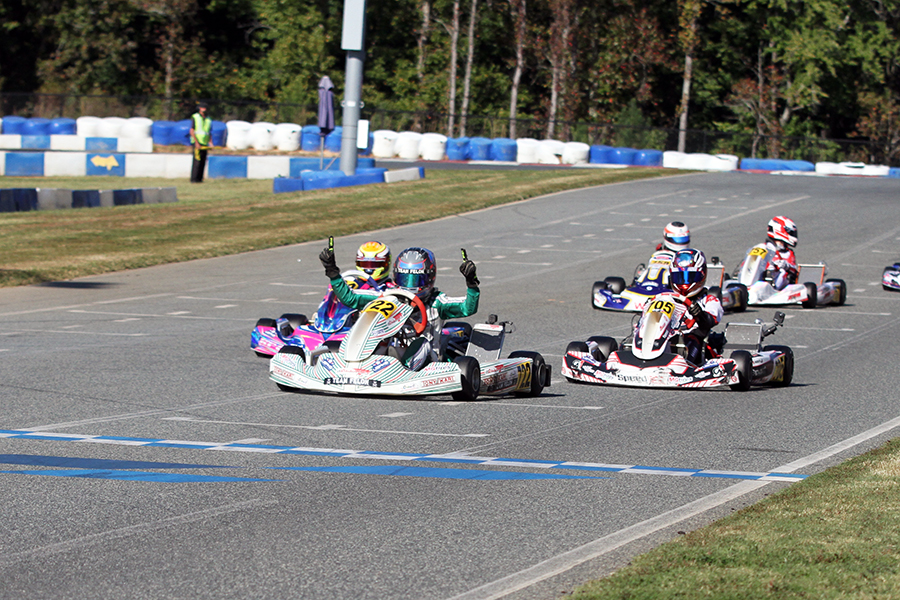 Entering the Final for the Rolison Performance Group X30 Junior class, the title was down to just two drivers – Jeremy Fletcher (TF / Tony Kart) and Ayden Ingratta (SCR / Redspeed) with Fletcher needing to finish fourth or better for the championship. Three drivers made up the lead pack, including the two title contenders, and Max Garcia (MPG / WPK). As this lead trio started shuffling, they were run down by the second group, one that included Saturday winner and Prefinal winner Caleb Gafrarar (RPG / Kosmic). The last few laps were a wild and exciting show. With two laps remaining, contact in the hairpin bottled up the pack and resulted in three-wide action down the straight to the last turn. That allowed Ingratta to go from fourth to first, leading with the white flag waving. Fletcher lined up on his bumper, and made his move at the double right handers. They drag raced to the final corner, and Fletcher was able to emerge with the lead to take the victory. It was his second on the year, after earning the win at the opening round. Ingratta settled for second, coming up 62 points short of the title. Gafrarar ended up in third, finishing up with three podiums in four rounds. Garcia laid down the fast lap of the race in fourth with Justin Adakonis (MDR / Kosmic) fifth. The weekend money went to Fletcher in first, Gafrarar second and Ingratta in third. Garcia finished third in the championship standings over Christian Miles (MDR / Kosmic) and Adakonis. 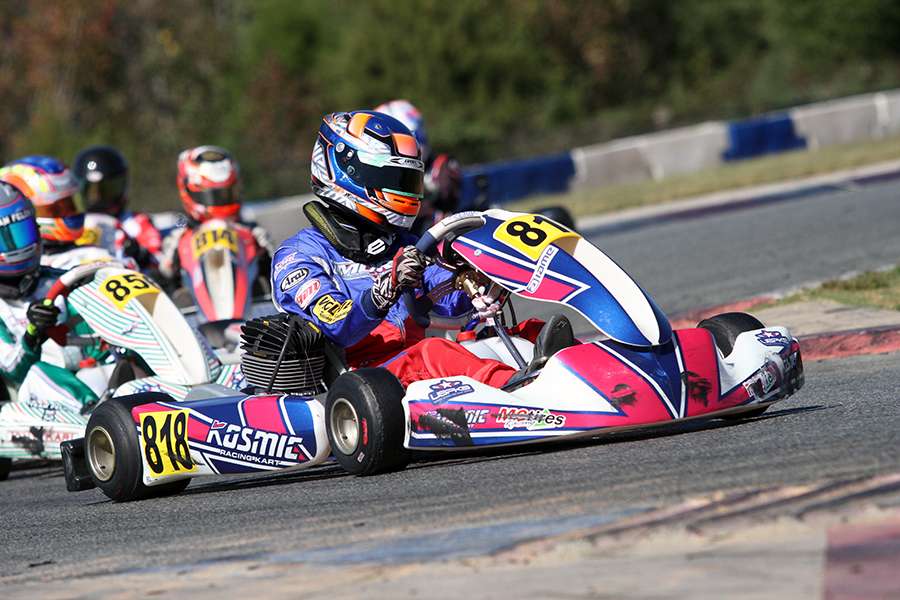 KA100 Senior presented by Timmy Tech was another wild finish with the points championship coming down to the wire. A large pack was formed early on until contact broke up the group. This allowed point leader Jeremy Fletcher (TF / Tony Kart) to be joined by Cooper Shipman (IRM / Tony Kart) and Jake Walker (MDR / Kosmic). Fletcher was at the point with Walker in second. With two laps to go, they made contact in Turn 8, allowing Shipman to move to second. On the final circuit, Shipman moved to the point and, in Turn 8, gave enough room for Fletcher to move inside. They pushed wide, allowing Walker to go from third to first, driving to the checkered flag for his first series victory. Shipman came across the line in second but was penalized for four spots for a pushback bumper penalty. That moved Fletcher to the second step and Aden Rudolph (Crosslink / Exprit) third for his first USPKS podium. Title contender Sebastian Wheldon (JC / Kosmic) drove an amazing race, climbing from 24th to fourth with Adam Brickley (Fullerton USA) improving 35 spots to fifth for the Hard Charger honor. Fletcher won the title by 41 points over Wheldon with Chase Hand (RPG / Kosmic), who was involved in the wreck, ending up third in the standings. Parker DeLong (RPM / Tony Kart) finished the year in fourth and Helio Meza (IRM / Tony Kart) was fifth. 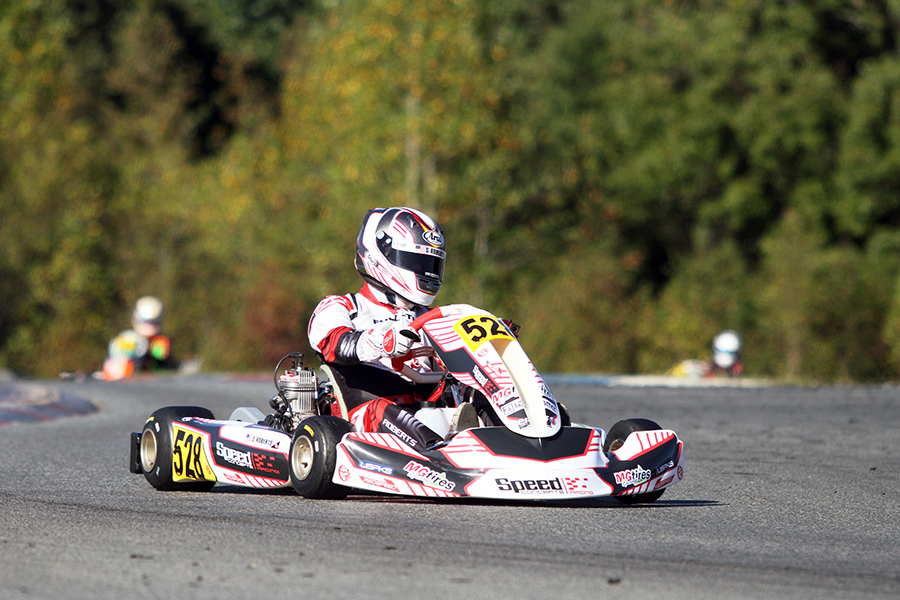 The final class with a championship to decide was the Speed Concepts Racing X30 Masters division. Mario Barrios (RPG / Kosmic) held a five-point advantage factoring in the drops over defending champion Scott Kopp (FMS / Exprit). Barrios grabbed the 10-point bonus for top qualifier, but following that, it was all Scott Roberts (SCR / Redspeed). The Saturday winner drove away to the win in the Prefinal and dominated the Final, leading all 22 laps. Behind him was the fight for the title as Kopp dropped to fourth at the start as Barrios ran second. Kopp would eventually work up to the second spot, and establish enough of a gap over Barrios to earn the runner-up position. With Barrios in third, the two ended with the same point total. Per the series rules, the first tie-breaker kept them even with one win on the season. The second was who held the most heat race wins, with Kopp holding two and Barrios only one. This extra heat race victory gave Kopp his second straight championship. Edward Fortier (Tony Kart) ended up fourth in the race with Alex Mueller (Tony Kart) advancing 10 spots to fifth after a Prefinal DNF. Three wins on the season put Roberts third in points ahead of Danny Robertson (RPG / Kosmic) and Miguel Mier (Crosslink / Exprit). 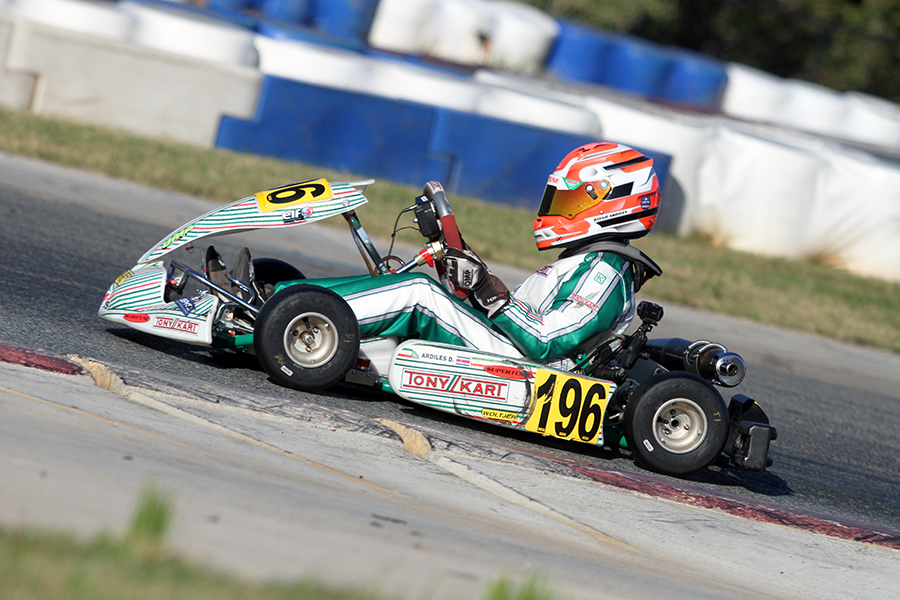 Trinity Karting Group Mini Swift saw Oscar Iliffe (IRM / Tony Kart) looking for redemption after missing Saturday’s Final due to a mechanical issue on the pace lap. Iliffe set fast time in qualifying and won the Prefinal. Iliffe showed the way for the first 18 laps of the Final, trailed by Oliver Wheldon (JC / Kosmic) and Diego Ardiles (Supertune / Tony Kart). Provisional champion Enzo Vidmontiene (Benik) started 14th and worked his way forward with each lap. With two laps to go, he was into the second spot. He fought Iliffe for the top spot, but failed as Wheldon took advantage to grab the lead for the white flag. The fighting continued in the final few corners with Ardiles emerging with the top spot and the victory. Wheldon held on for second with Vidmontiene placing third. Iliffe and Vivek Kanthan (Parolin USA) completed the top-five. The final advantage for Vidmontiene in the championship was 188 points ahead of Ardiles. Wheldon finished second with Iliffe fourth and Kai Johnson (Energy) fifth. 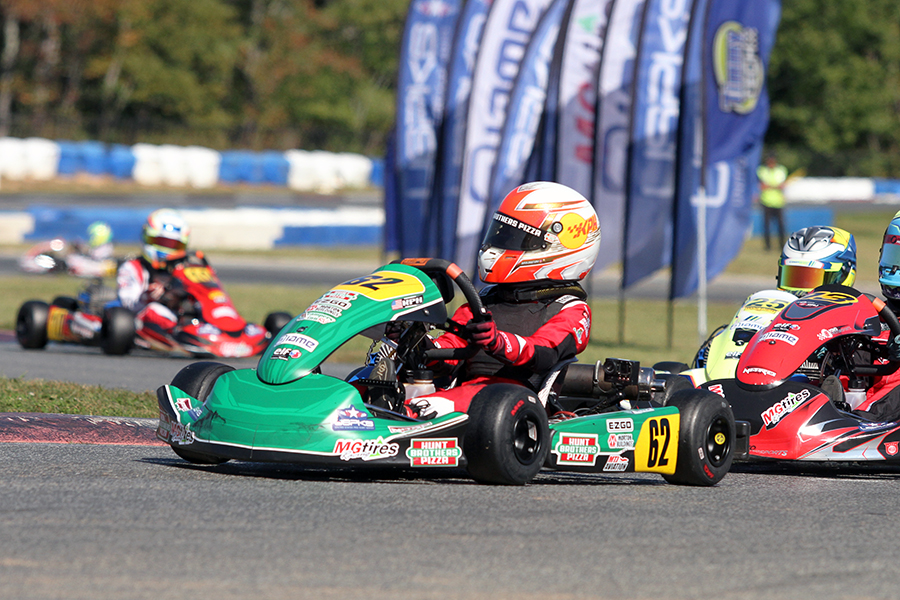 The Team Ferris Racing Micro Swift class saw Keelan Harvick (Nitro Kart) stamp a series championship with another victory. Harvick swept Saturday and began a sweep on Sunday with fast time in qualifying. He was the provisional winner in the Prefinal, but a two-position penalty took the win away and put him inside row two for the Final behind Gianmatteo Rousseau (Nitro Kart). Harvick was able to get up to the lead on the opening circuit and was eventually joined at the front by Ethan Tovo (Nitro Kart) and Lucas Palacio (CompKart). Each took a turn at the point until Harvick secured the lead by lap 16. From there, he drove to his fourth victory of the season, securing the series championship. Tovo and Palacio completed the race podium with Rousseau in fourth and Bronson Koustas (Parolin) in fifth. Tovo ended up as vice-champion with three-time race winner Augustus Toniolo (RPG / Kosmic) holding third, despite missing the final weekend. Alessandro Truchot (Parolin) and Rousseau completed the championship podium.

The ninth season of the United States Pro Kart Series is now concluded, marking a record-breaking season with all four events bringing in over 250 entries for the seven IAME categories. The attention now turns to 2022, with the March opener now scheduled for the Orlando Kart Center.